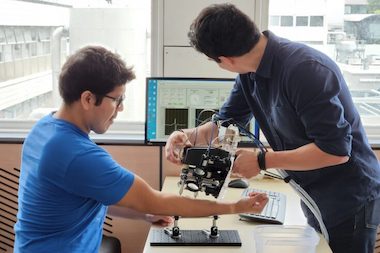 A project supported by the UK's EPSRC and led by the University of Warwick has developed a scanning device intended to improve cancer diagnosis and treatment.

Christened the Skinometer, an initial version of the device is undergoing preliminary testing on patients at University Hospitals Coventry and Warwickshire NHS Trust, and a handheld version has already been developed for more mobile use.

"There are about 16,000 new cases of skin cancer diagnosed in the UK alone each year and that obviously puts a strain on the NHS," commented project leader Emma MacPherson from the University of Warwick. "So if we can speed up the process, that's going to relieve a lot of pressure and reduce costs."

The Skinometer project, funded by £650k from the EPSRC and running until the end of 2022, is based on the use of terahertz illumination. Its goal is to accurately characterize skin in vivo in ways that will help to determine the likely extent of any tumour beneath the surface.

"The radically new THz skinometer will be able to quantitatively measure a unique combination of skin properties, including the diffusivity of occluded skin," commented the project. "No other existing technologies can do this. It will be a powerful new tool for clinicians including dermatologists and skin-care researchers for improving diagnosis, monitoring and treatment of skin conditions."

Alongside the study of skin disease, the project has also been tasked with building a greater understanding of how different sunscreen protections interact with the skin, ultimately enabling the creation of creams better able to block UV light. The group's THz technology is being used to assess UV filter/emollient combinations and investigate whether different skin conditions can benefit from different emollient blends.

Clinical use and treatment of other cancers

Development of the Skinometer builds on prior work in Emma MacPherson's Warwick group relating to terahertz research and in vivo THz sensing, a field traditionally based around comparing a sample's real-world reflectivity with that of a theoretical model and equating the extent to which they differ with particular physical parameters.

The Warwick group has developed this principle further by designing a multiconfiguration ellipsometer, in which a double prism set-up makes it possible to illuminate the outermost layers of skin with THz illumination via two different optical paths and create four complementary sets of spectral ratios, significantly enhancing characterization capabilities.

As described in a Advanced Photonics Research paper by MacPherson and colleagues, this arrangement can directly monitor dynamic changes in the outer epidermis and stratum corneum layers of the skin, while the THz dispersion and birefringence can probe the level of hydration and cellular inhomogeneity, producing results in good agreement with microscope images.

The University of Warwick group has also addressed a practical hurdle to clinical application of its technology by developing a single pixel THz camera able to achieve 32 × 32 pixels at 6 frames per second, said to be "orders of magnitude faster than the state of the art."

The goal for the Skinometer is to improve the diagnosis of cancers in living tissue in real time, speeding up diagnosis and perhaps providing tailor-made treatment for each patient.

"It could potentially enter clinical use within 5 years and, beyond that time frame, could eventually become a feature of GP's surgeries," said MacPherson. "My vision is that ultimately the technology can also be extended to benefit detection of a variety of different cancers, such as breast and colon cancers."