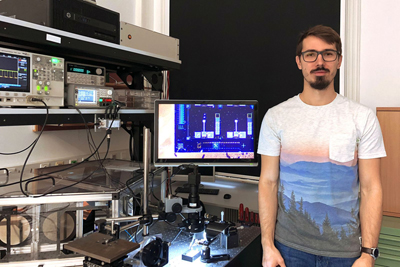 The Technical University of Vienna (TU Wien), in Austria, has now succeeded in producing an extremely simple and compact source of terahertz radiation: An oscillator with double resonant-tunnelling diodes. Its radiation power significantly outperforms similar devices. The new technology has now been published in Applied Physics Letters.

“Today, there are various ways to generate terahertz waves,” commented Prof. Michael Feiginov, of the Institute of Electrodynamics, Microwave and Circuit Engineering, at TU Wien. “One can use quantum cascade lasers, for example. With those, it is possible to achieve high intensities, but they have to be cooled down to very low temperatures,” he said.

Also, large, complex photonic systems can be employed, with several optical lasers whose radiation is mixed together to produce longer wavelengths. This makes it possible to produce the desired wavelengths in a flexible way. "However, our goal was to develop a simple and extremely compact terahertz source,” said Prof. Feiginov. “If we want a technology to be incorporated into everyday devices in the future, then the terahertz sources must be small and function at normal room temperature.”

To do this, the team now used neither optical nor quantum cascade lasers, but simple oscillators. “Oscillators are something quite common in electrical engineering,” said Petr Ouředník, the paper’s first author. If certain electronic components, such as coils and capacitors, are coupled, then the energy flows back and forth between them, thereby generating electromagnetic radiation. “But the problem is usually the losses, which you can imagine as electric resistance,” added Ouředník. “This normally ensures that the oscillations in these resonant circuits come to a standstill after a very short time.”

However, this can be changed with quantum-physics tricks: “We use resonant-tunnelling diodes, where the current flows between two barriers as a result of tunnelling,” said Ouředník. “The quantum well between the barriers is particularly narrow in our structures, so only very specific and very few electron states can exist there.” By applying a voltage, these electron states and their energies can be changed.

This means that the electrons can no longer cross over from one area to the other, and the current flow decreases instead of increasing. So the electrical resistance becomes negative. “A negative resistance in the oscillating circuit, however, means that the oscillating circuit does not lose its energy, it gains energy instead. The electromagnetic oscillations keep going by themselves and the external direct current is converted into terahertz radiation,” said Prof. Feiginov.

A notable feature of this technology is not only the considerably high intensity of the terahertz radiation, but above all its small size: the entire structure is considerably smaller than a millimetre. It would therefore be potentially suitable to be built into compact devices such as smart phones.

“There are so many application ideas that we can't even say today which one is the most realistic," said Michael Feiginov. “The terahertz range is used in radio astronomy, one can use it to see through optically opaque objects, for example in security checks at the airport or even in material testing.

“Another exciting application are chemical sensors: different molecules can be recognised by the fact that they absorb very specific frequencies in the terahertz range. All these technologies will benefit from simple and compact terahertz sources, and that’s what we wanted to make an important contribution to.”