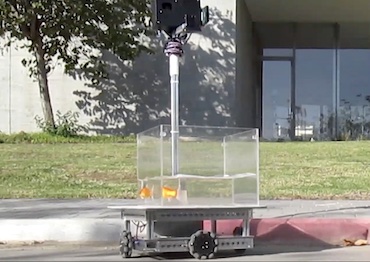 Whether a fish needs a bicycle will remain a question for the social sciences, but a team at Ben-Gurion University of the Negev (BGU) has used photonics to allow a goldfish to direct a wheeled vehicle as part of research into animal behavior.

The experiment was designed to test whether the fish's innate navigational abilities extended to an understanding of situations beyond its immediate watery environment, termed a domain-transfer methodology.

The fish-operated-vehicle was built by mounting the goldfish's tank on a wheeled platform. A basic lidar and camera system positioned above the tank and looking vertically down at it assessed where the goldfish was located in its tank, what the fish's movements were, and where the vehicle was positioned within a dry test arena.

After training fish to associate a specific visual target with a reward, researchers placed the target in a clearly visible location on the wall of the arena. The fish's movements in the tank were translated into motion of the vehicle, and the fish directed its transport towards the target even when the journey was interrupted in the middle by an obstruction or made more complex by false targets. The team also allowed the fish to go for a spin outdoors.

A similar approach to goldfish locomotion made waves in 2017 when students at Carnegie Mellon University used an overhead camera to allow the movements of a fish in a tank to control the motion of a cart carrying the tank, although that project lacked the behavioral science dimension.

"The study hints that navigational ability is universal rather than specific to the environment," said Shachar Givon from BGU about the new research. "It shows that goldfish have the cognitive ability to learn a complex task in an environment completely unlike the one they evolved in."

Lidar has proven to be a valuable tool for the study of animal ecology, and real-world applications of the technique for the remote monitoring of fish locations and for surveys of fisheries have assisted naturalists for some years.

A project at the US National Oceanic and Atmospheric Administration termed Fish Lidar, Oceanic, Experimental (FLOE) has employed lidar platforms mounted on aircraft as a means of rapidly detecting the movement and density of fish in the ocean, at a fraction of the cost incurred by visual or sonar surveys carried out from ships. In 2018 airborne lidar also allowed the US National Park Service to spot and capture non-native fish threatening the ecosystem of Yellowstone Lake, a technique that successfully located groups of fish and their spawning grounds.

The Israeli goldfish vehicle employs a simpler lidar application as part of its optical system, but the technique offered the researchers an effective way to visualize movement of an animal within its environment for the purposes of the study.

Publishing the results in Behavioural Brain Research, the team commented that the results demonstrated "how a fish was able to transfer its space representation and navigation skills to a wholly different terrestrial environment," supporting the hypothesis that this may be a universal quality independent of species.