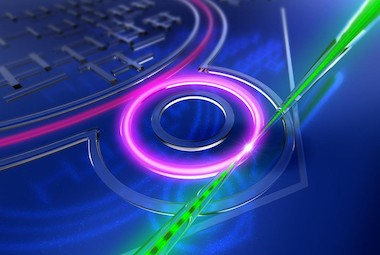 In the ring: beam manipulation

As published in Nature, the approach could also lead to new quantum measurement schemes in electron microscopy by enhancing existing beam control schemes.

The project was a collaboration between EPFL and the Max Planck Institute for Biophysical Chemistry, joining the usually unconnected fields of electron microscopy and integrated photonics.

"Integrated photonics circuits based on low-loss silicon nitride have made tremendous progress, and are intensively driving the progress of many emerging technologies and fundamental science such as lidar, telecommunication, and quantum computing," said Tobias Kippenberg from EPFL. "They now prove to be a new ingredient for electron beam manipulation."

The team built upon existing work using photonic integrated circuits to guide light on a chip with ultra-low losses, an approach in which optical fields can be enhanced using micro-ring resonators.

To date these theories have been limited to behavior in the ultra-fast regime, but the EPFL project achieved highly efficient electron-photon interactions in the continuous-wave regime instead, using an electron microscope and silicon nitride photonic integrated circuits.

The project's device employed a waveguide directing laser light into a ring microresonator of cross-section 2 microns × 650 nanometers. This photonic chip was positioned in a customized transmission electron microscopy rig, so that the electron beam was steered through the optical near field of the photonic circuit.

In trials the platform provided coherent phase modulation of a continuous electron beam while employing only a few milliwatts of continuous wave laser power. This constitutes a dramatic simplification and efficiency increase in the optical control of electron beams, and the approach could be seamlessly implemented in a regular transmission electron microscope, according to EPFL.

The same technique could also make electron-photon interactions much more widely applicable than the previous theoretical restrictions have suggested, and the researchers plan to extend their research collaboration into new forms of quantum optics and attosecond metrology for free electrons.

"Interfacing electron microscopy with photonics has the potential to uniquely bridge atomic scale imaging with coherent spectroscopy," said Claus Ropers from the Max Planck Institute for Biophysical Chemistry. "For the future, we expect this to yield an unprecedented understanding and control of microscopic optical excitations."