FBH gets into the yellow-green with diode sources for ophthalmology 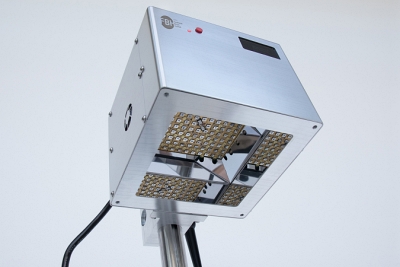 The FBH team, known for its development of laser diode and LED technology, is due to present its latest progress in the form of a high-power diode laser stack, UV LEDs for medical use, and novel yellow-green laser modules aimed at applications in ophthalmology.

Retinal therapy
Exhibited for the first time, the yellow-green emitters are said to be directly tunable from 532 nm to 590 nm, with up to 2 W output power in continuous-wave operation.

“The compact laser sources have the potential to replace significantly larger dye and copper bromide lasers,” stated FBH. Yellow lasers are used in a variety of ophthalmic procedures to treat retinal problems - examples including diabetic retinopathy and retinal vein thrombosis.

Alongside those novel modules on the FBH booth will be some new ultraviolet LED irradiation systems capable of destroying multidrug-resistant pathogens and coronaviruses.

The systems, already being tested at a number of local hospitals, are said to inactivate the MRSA “superbug” and viruses including SARS-CoV-2 directly on humans but without damaging skin.

Co-developed with a team at the Technical University of Berlin, each system is equipped with 120 LEDs that emit at 233 nm.

“Thanks to optimized semiconductor epitaxy and chip process technology, these latest-generation LEDs can be operated with twice the current as before - they deliver more than 3 mW output power at 200 mA,” FBH said.

New silicon packages for the UV LEDs also improve heat dissipation, with aluminum reflectors and a plano-convex lens ensuring a beam angle of only 60 degrees for better transmission.

“The systems can irradiate an area of 70 mm diameter with a homogeneity of more than 90 per cent,” FBH added. “The UVC light is free of skin-damaging wavelengths above 240 nm and has an irradiance of 0.4 mW/cm2 - ten times higher [than] previous systems.”

1 kW into 1 mm fiber
FBH indicated that it has also made some significant advances with high repetition-rate pump lasers for use in large, high-energy solid-state laser systems.

“The institute was able to increase the peak output power of its diode laser bars in quasi-continuous operation by up to four times, while maintaining excellent efficiency,” it says.

The upshot of that would be a lower cost per watt of power - critical for commercial deployment. FBH has arranged the optimized diode lasers into stack modules, with additional improvements in packaging and optics.

It says that a fiber-coupled pulsed pump laser source with 1 kilowatt output power at 780 nm has now been demonstrated for the first time in a 1 mm-diameter core fiber - down from 1.9 mm in earlier systems.

Passive cooling has also enabled an increase to the duty cycle from 20 per cent to 50 per cent, with 10 ms pulses and a repetition rate between 10 Hz and 50 Hz.