Sensing technologies at the epicenter of military priorities, as IR vision is “the eyes of warfighters”, says Nibir Dhar. 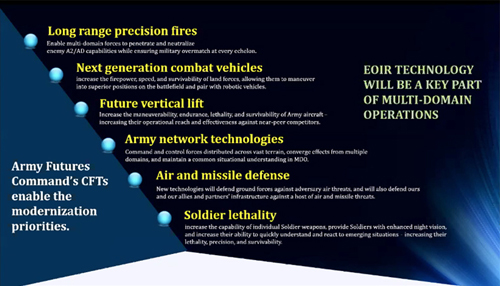 At the SPIE Optics + Photonics conference this week in San Diego, Nibir Dhar, of the U.S. Army’s CCDC C5ISR Center for Night Vision and Electronics Sensors Directorate, presented a plenary talk entitled “Infrared technology: What is on the Horizon?”

The theme was that the modern warfighter’s effectiveness in combat missions can be severely limited by a lack of adequate situational awareness. Better target discrimination, a better view of the operational scene with larger fields of regard, and longer standoff distances are some of the important criteria in the Army’s decision making about which new technologies to introduce.

The U.S. Army’s approach to military procedures and the adoption of new technologies is known as multi domain operations . What is wanted is an integrated capability in the battlefield that achieves cross-domain synergy. Dhar said, “There’s a lot of investment going on to modernize the whole war system and this modernization strategy is actually divided into six sections.”

Dhar said, “The Army’s cross functional team is looking into all of these but the key point here is that new IR technology will be at the epicenter of these priorities because IR vision systems are really the eyes of our soldiers.” 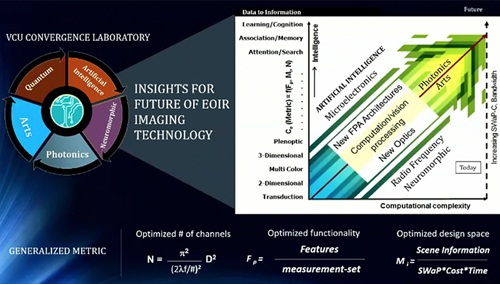 What is on the horizon?

Dhar told the conference, “Currently we are working with Generation 3 systems, with some form of intelligence and higher operational temperatures in those systems. But the key question now, looking out to the horizon, what is next? Considering the fourth generation, nobody really knows what it is but a lot of our leaders are looking into what is the potential fourth generation. This chart [right] gives you a some idea of what could be the future.

“If you want to make an optimized design space then your scene information per unit size, weight, power, cost, and time matters. Given infinite amount of resources and time one can do many things but in within the U.S. Army we have to be able to deploy things,” he said.

Dhar suggested that future imaging systems will have multiple facets: scaling, sensing, rendering, speed, fusion, and processing. “One thing I want to point out is that the visible imaging system is far ahead of the infrared for obvious reasons and we can learn many lessons from visible range systems.

“Recently, we have demonstrated that a microbolometer, for example, can be miniaturized where it can be embedded within a smart phone. In that case, each soldier could actually have an infrared thermal camera. So scaling can be a significant benefit to warfighters,” said Dhar.

“Looking at sensing, there is a lot of research going on here with relevance to the U.S. Army. Three good examples are: compressive sensing, integral imaging, and computational imaging. All of these are really making a lot of progress within the visible domain – but still lagging behind in the infrared technology,” he continued.

“We have developed programs that use some of these techniques to see through obscurants, for example brownout conditions. The longer the wavelength the better transmission rate so in order to see through an obscurant you have to use infrared imaging. You will see within next few years a lot of activity in this area so that's really a big thing coming.”

“There's a lot of work going on in the infrared domain where you can have high spatial as well as temporal resolution. The new sensing modality will allow you such as such an approach.” 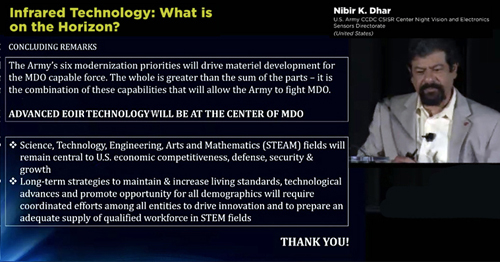 Another important development Dhar mentioned is the Internet of Battlefield Things – or IOBT – where the information has to be fresh and presented right away at the warfighter’s use.

“That is a tremendous challenge today and this is going to be the next opportunity for multidomain operation; but we have to be able to provide this information to a soldier on a minute by minute basis.”

Fusion of images based on different wavelengths is another area of great interest. He presented individual images of a night scene based on shortwave, infrared, and visible imaging, then a combined image which revealed new features not shown by the separate pictures.

He commented, “Now if you can put all these things together you will have much better situational awareness, so fusion is going to be another big thing and it could also be multidomain.”

Finally, learning would be an important associated aspect of future image and signal processing. “How can we make this more intelligent? Mother Nature with the human eye does it with little effort and such low power, it's pretty amazing,” he concluded.