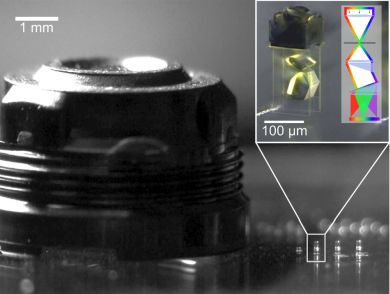 Advances in direct laser writing and 3D printing have helped the field of micro-optics achieve striking breakthroughs in tiny optical devices, driven by miniaturization philosophies dating back many years.

A project at the University of Stuttgart's Institute of Applied Optics (ITO) has now used 3D printing to manufacture a miniature spectrometer, fabricated via two-photon laser writing and inkjet deposition.

As described in Light: Advanced Manufacturing the optical system of the assembled device measures 100 x 100 x 300 microns, and features a wavelength range of 200 nanometers in the visible band from 490 to 690 nanometers.

"For 3D-printed micro-optics, the complexity of this optical design marks an innovation," commented Andrea Toulouse of the University of Stuttgart. "Refractive, diffractive and spatially filtering elements have never been combined in such a small volume to create a complex and monolithic measurement system."

Previous miniaturization of spectroscopic measurement devices has often involved quantum dot and nanowire technology, which in turn rely on computational methods to process and generate the spectral data. But this approach is calibration-sensitive and requires complex reconstruction algorithms, according to the ITO.

"An order of magnitude this small could only be realized by computational approaches until now," said Toulouse. "In contrast, we translate the spectrum directly into a spatially encoded intensity signal which can be read out with a commercial monochromatic image sensor."

Such direct separated spatial-spectral responses, in which the incoming light is separated and measured directly by a sensor, has until now involved architectures demonstrating a footprint area at least two orders of magnitude larger than the new instrument, commented the Stuttgart project.

The design of the spectrometer was created with the strengths of eventual 3D-printing from photopolymer in mind, such as the inherent near-perfect alignment of lenses and mounts thanks to their simultaneous manufacture, and the ability of surfaces to be heavily tilted and asymmetrical.

Two-photon direct laser writing using a commercial 3D printer and photoresist materials was used to create the transparent optical elements, including collection and collimation lenses, along with tilted surfaces to direct the light path within the device's overall vertical layout. Non-transparent elements were fabricated using a conductive ink applied via a super-fine inkjet printer. This approach allows the lenses, grating, entry slit, and mounts to all be 3D-printed in one step, said the ITO team.

Trials found that the miniature spectrometer designed and built in this manner featured a spectral resolution of 9.2 ± 1.1 nanometers for light at 532 nanometers wavelength, and 17.8 ± 1.7 nanometers at a wavelength of 633 nanometers.

Further work at ITO will address the relatively significant noise level from the prototype device, possibly through changes to the conductive ink layer adjacent to the entry slit, although a trade-off with the inherent properties of the photoresist material will need to be considered.

The proof-of-concept device already points towards novel applications, however, not least due to the potential for two-photon 3D printing to manufacture devices directly onto image sensors, and the convenient size compatibility with current smartphone camera lenses.

"With its volume of less than 100 by 100 by 300 microns. we can explore a whole new size range for direct spectrometers," said Toulouse.