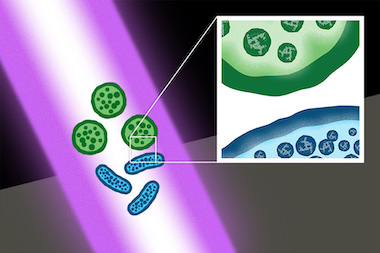 Multidrug-resistant organisms (MDROs) are a continuing healthcare problem, as some bacteria and other pathogens develop a level of immunity to conventional antibiotics.

A project at Washington University School of Medicine in St. Louis has now demonstrated a possible advance in the fight against MDROs, and shown how ultrashort laser pulses can kill drug-resistant bacteria and bacterial spores without damage to human tissues.

Published in Journal of Biophotonics, the findings could point towards improved techniques for treating infections, sterilizing wounds or preparing blood products.

"Imagine if, prior to closing a surgical wound, we could scan a laser beam across the site and further reduce the chances of infection. I can see this technology being used soon to disinfect biological products in vitro, and even to treat bloodstream infections in the future by putting patients on dialysis and passing the blood through a laser treatment device."

The principle of using laser irradiation as an anti-bacterial technique has been investigated for some time, with ultraviolet sources being one obvious route to disrupting the protein structure of a pathogen and altering its potency. The problem with this approach is that the UV light will inevitably damage human cells and proteins too.

Tsen and colleagues were granted a US patent back in 2009 regarding the use of femtosecond laser pulses at more appropriate wavelengths, particularly those where water is transparent, as "a method of inactivating or diminishing the activity of microorganisms" by exciting relatively large vibrational modes in "structures essential for the functionality of microorganisms."

A 2012 review of the topic in Journal of Biomedical Science from Washington University and Arizona State University concluded that ultrashort pulse (USP) sources could deactivate viruses through a process termed impulsive stimulated Raman scattering, which deposited laser energy into the virus's protein shell through disruptive low frequency acoustic vibrations.

The same laser pulses were also found to damage bacteria, by inducing relaxation of the existing DNA structure and disrupting normal cellular metabolism.

The new project investigated the use of USPs against a number of clinically significant MDROs, including MRSA and a treatment-resistant from of Escherichia coli - two very different types of bacteria, representing two distant branches of the bacterial kingdom according to the team - along with spores of the bacterium Bacillus cereus, which causes food poisoning and can withstand boiling and cooking.

"In all cases, the lasers killed more than 99.9 percent of the target organisms, reducing their numbers by more than 1,000 times," commented the university.

"At a certain laser power, we are inactivating viruses, and as you increase the power, you start inactivating bacteria," commented Tsen. "But it takes even higher power than that, and we are talking orders of magnitude, to start killing human cells. So there is a therapeutic window where we can tune the laser parameters such that we can kill pathogens without affecting the human cells."

If the process proves suitable for the inactivation of other kinds of bacteria and viruses, then USPs could also provide a new approach to the challenge of making blood products and other biological products safer, and avoiding the spread of blood-borne viruses.

"We screen all blood products before transfusing them to patients, but the problem is that we have to know what we’re screening for," noted Tsen. "If a new blood-borne virus emerges, like HIV did in the 1970s and 1980s, it could get into the blood supply before we know it. Ultrashort-pulse lasers could be a way to make sure that our blood supply is clear of pathogens both known and unknown."