Researchers at University of California Riverside have developed a probe to compress lamplight into tiny spot for imaging microstructures. 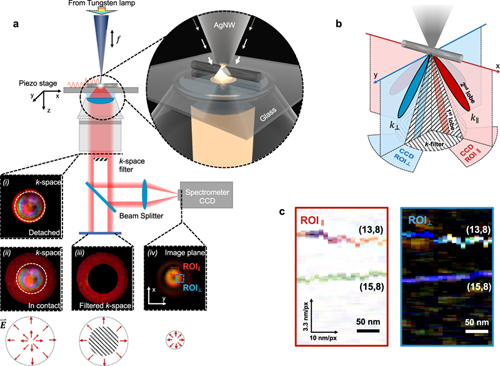 Scientists at the University of California Riverside (UCR) have developed what they describe as “revolutionary imaging technology” that compresses lamp light into a nanometer-sized spot. They say that this advance, which improves color-imaging resolution to an unprecedented 6 nm level, will help scientists see nanomaterials in enough detail to make them more useful in electronics and other applications.

The context for this work is the increasing development of new materials for next-generation electronics so tiny that they do not reflect enough light to reveal fine details, such as colors, with even the most powerful [conventional] optical microscopes.

Under an optical microscope, says the UCR explanation, carbon nanotubes, for example, look grayish. The conventional scopes’ inability to distinguish fine details and differences between individual pieces of nanomaterials makes it difficult for scientists to study their unique properties and discover ways to perfect them for industrial use.

In the Nature Communications paper, the researchers describe their “revolutionary imaging technology that compresses lamp light into a nanometer-sized spot.” They say that the advance, improving color-imaging resolution to an unprecedented 6 nanometer level, will help scientists see nanomaterials in enough detail to make them more useful in electronics and other applications.

Ming Liu and Ruoxue Yan, associate professors in UC Riverside’s Marlan and Rosemary Bourns College of Engineering, developed this tool with a superfocusing technique also developed by the team. The technique has been used in previous work to observe the vibration of molecular bonds at 1-nanometer spatial resolution without the need of any focusing lens. 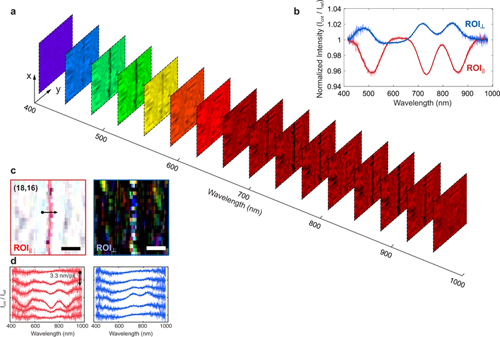 Slices from the hyperspectral data etc. Click for full explanation.

In the new report, Liu and Yan modified the tool to measure signals spanning the whole visible wavelength range, which can be used to render the color and depict the electronic band structures of the object instead of only molecule vibrations. The tool “squeezes the light from a tungsten lamp into a silver nanowire with near-zero scattering or reflection, where light is carried by the oscillation wave of free electrons at the silver surface.”

The condensed light leaves the silver nanowire tip, which has a radius of just 5nm, in a conical path, like the light beam from a flashlight. When the tip passes over an object, its influence on the beam shape and color is detected and recorded.

“It is like using your thumb to control the water spray from a hose," Liu said, "You know how to get the desired spraying pattern by changing the thumb position, and likewise, in the experiment, we read the light pattern to retrieve the details of the object blocking the 5 nm-sized light nozzle.”

The light is then focused into a spectrometer, where it forms a tiny ring shape. By scanning the probe over an area and recording two spectra for each pixel, the researchers can formulate the absorption and scattering images with colors. The originally grayish carbon nanotubes receive their first color photograph, and an individual carbon nanotube now has the chance to exhibit its unique color

“The atomically smooth sharp-tip silver nanowire and its nearly scatterless optical coupling and focusing is critical for the imaging,” said Yan. “Otherwise there would be intense stray light in the background that ruins the whole effort.”

The researchers expect that the new technology can be an important tool to help the semiconductor industry make uniform nanomaterials with consistent properties for use in electronic devices. The new full-color nano-imaging technique could also be used to improve understanding of catalysis, quantum optics, and nanoelectronics.