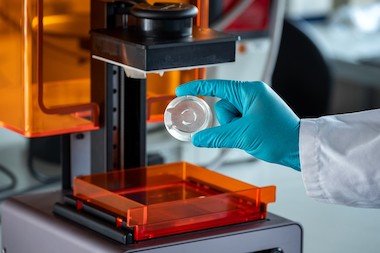 The success of tissue transplantation procedures depends on many variables, including the shape and structure of the fresh tissues being used for the operation.

A project involving the Fraunhofer Institutes for Applied Polymer Research (IAP) and for Laser Technology (ILT) has now developed a method for altering the shape of tissue grafts to suit the exact needs of a patient, essentially allowing customized tissue engineering.

The new approach involves allowing the missing tissue to be grown within a patient's body, rather than created externally and then grafted in position, using isolation chambers implanted under the skin.

Those chambers can be individually adapted to the geometry of the wound involved, using laser-based 3D printing of photo-resins to create shapes closely matched to the nature of the patient's soft tissue defect, an improvement over previous use of round isolation chambers cast from conventional plastics.

"3D printing not only offers the advantage of being able to specify the shape of the tissue, but we have also developed chamber designs that make tissue cultivation as comfortable as possible for patients and allow easy handling during surgery," said Andreas Hoffmann, project manager at Fraunhofer ILT.

The research has been undertaken under the FlexLoop project, a two-year German federally funded effort running until 2022 to develop the principle of cultivating tissue flaps with blood supply in plastic chambers embedded below the skin level. Creating the chambers by additive manufacturing is a key aspect, since the Teflon material used in normal chambers cannot be 3D-printed.

Unlike tissue grown in a petri dish, the tissue created in the chamber is fully vascularized and supplied with blood. This means that the connective tissue created adopts the shape of the isolation chamber, and is suitable for transplantation without having to sacrifice healthy donor tissue.

The new breakthrough builds on previous research at Fraunhofer ILT into the use of lasers in tissue therapy and related applications.

In 2012 the Institute led a project developing new ways to manufacture a vascularized scaffold on which artificial tissue can be grown, using additive manufacturing to build up the necessary substrates. That project, ArtiVasc 3D, led to a 3D printing operation for the fabrication of artificial blood vessels, said at the time to be advancing the development of artificial skin models "into uncharted territories" facilitated by laser-based materials processing.

A subsequent project, HoPro-3D launched in 2018 alongside a group of industrial partners, investigated the production of macroscopic polymer structures via the use of two selectable exposure systems. One stated use of the platform was for support scaffolds for 3D tissue models, along with microfluidic and micromechanical items.

Next steps for the new breakthrough under the FlexLoop project will include validation in small and larger animal models, while the project seeks economic cooperation with industrial companies.