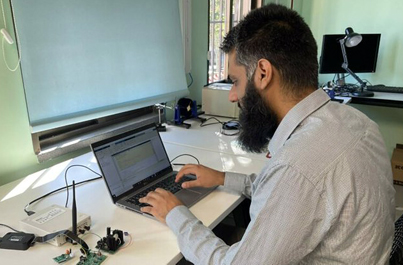 Li-Fi, also known as “Light Fidelity” is a wireless, optical networking technology, which uses LEDs to transmit data. Potential applications of Li-Fi include “smart” homes, cities, and even “smart” agriculture.

In their recently published paper, the IMDEA team demonstrates that Li-Fi and RF backscatter are complementary and have unexplored interactions.

The team has addressed many challenges on the system design in the Li-Fi transmitter, the tag and the RF receiver. They designed the first Li-Fi transmitter that implements a chirp-spread spectrum using the visible light spectrum.

They also use a small bank of solar cells for communication and harvesting and reconfigure them based on the amount of harvested energy and desired data rate.

They further alleviate the low responsiveness of solar cells with a new low-power receiver design in the tag. Experimental results with an RF carrier of 17 dBm show that they can generate RF backscatter with a range of 80.3 meters/𝜇W consumed in the tag, which is almost double with respect to prior work.

Dr. Giustiniano of MIDEA commented, “Our work opens the door to long-range, battery-free Internet of Things applications retrofitting lighting infrastructure for communication, something that was not previously possible to achieve. It’s the result of three years of research.”

The IMDEA Networks team, comprising Domenico Giustiniano, Borja Genovés Guzmán, and Muhammad Sarmad Mir, has enjoyed the collaboration of Dr. Ambuj Varshney, of Uppsala University, who is soon to be Assistant Professor at the National University of Singapore.

Guzmán, Post-Doc Researcher at IMDEA and one of the co-authors of the paper, said, “We have demonstrated that solar cells can be used as both a source of power harvesting and as a communications receiver. Our solution solves the trade-off between the captured energy required by the IoT device and the desired data rate, allowing our system to operate without using batteries.”