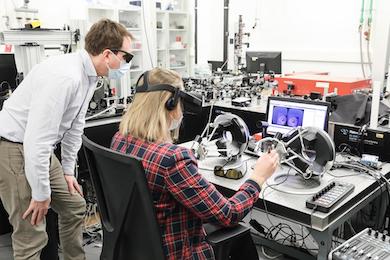 Watch crystals, the clear glass material on the front of any timepiece, have to be tough enough to survive everyday use but also suitable for engraving and customization by the watch manufacturers before the watch is assembled and sold.

Historically the preparation of a watch crystal has involved traditional artisan engraving and cutting tools, but a project at Swiss research center EPFL has now applied lasers to the task.

In a collaboration with watchmakers Vacheron Constantin, EPFL set out to use new technology to broaden the range of possibilities that craftsmen can explore, without losing their traditional know-how or the finesse of their movements.

"We wanted to incorporate innovation into this highly traditional method, which has been honed at our company over more than 265 years," commented Paul Bertusi of Vacheron Constantin.

The research was undertaken by EPFL's Galatea Laboratory, part of the School of Engineering, a research group specifically tasked with tailoring material properties locally using lasers as a means of writing functional behaviors into components.

Ongoing research topics in the Galatea Lab group include using ultrafast lasers to create local phase changes within a material, potentially allowing areas of different density, thermal properties or optical behavior to be written into a bulk substance; and the initiation of self-organization phenomena at the focal spot of a laser for the manufacture of periodic structures.

These studies of how lasers interact with materials have made particular use of advances in high-intensity ultrashort laser pulses, the same technology that won the 2018 Nobel Prize in physics.

"Until then, it was impossible to work inside materials," said Yves Bellouard, EPFL Associate Professor and head of Galatea Lab. "I spoke with Richemont SA, owners of Vacheron Constantin, about how we could combine this technology with craftsmanship techniques, and applying it to watch engraving seemed like the perfect choice."

3D sculptures within a crystal

The new work on watch crystals involved collaboration between Galatea and Force Dimension, an EPFL spin-off that develops robotics technology with a focus on the provision of force-feedback and haptic experience to users.

The haptic feedback is the key to allowing Vacheron Constantin's existing experts to use a new technology with the same skill and precision as the traditional methods allow. Force Dimension created a digital pen attached to a robotic arm that uses haptic technology to give users an essential feeling of touch, as they engrave materials virtually on screen and the laser repeats their actions on a watch crystal.

"Programers enter data on the strength and position of a desired movement into the machine, which then reproduces it on the robotic arm," said Force Dimension co-founder François Conti. "That gives craftsmen the right resistance, as if they were actually touching the object."

Trials using several different viewing devices for the system - a binocular device, then a computer screen, and finally a virtual reality headset - demonstrated that the learning curve for an engraver was considerable, but that ultimately the laser may offer a route to novel structures machined into the watch crystal glass.

"Being able to structure watch crystals in 3D, work anywhere in a piece of crystal, and create genuine 3D sculptures within a crystal – all that opens up extremely interesting possibilities," commented Paul Bertusi.