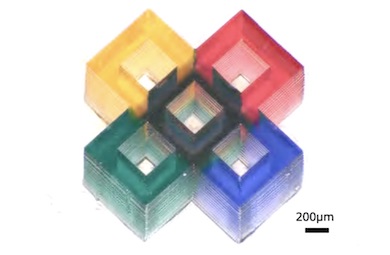 Advances in stereolithography, the 3D printing technique in which light is used to form solid structures from photocurable resins, have made it an attractive method of manufacturing a range of items, with recent breakthroughs boosting both the speed and versatility of the process.

Incorporating more than one raw material into the process, however, has remained challenging. Methods for swapping feedstock polymers have been investigated, but avoiding contamination between the different materials is essential.

The findings, reported in Optical Materials Express, involved designing a translational XY stage on which both photocurable resins and cleaning solvents could be accommodated, along with an air-blowing system to remove the cleaning solvent after application.

"Combining multiple kinds of materials can be used to create a function that cannot be realized with a single material," said Shoji Maruo from Yokohama National University. "Methods like ours that allow single-step fabrication of multimaterial structures eliminate assembling processes, allowing the production of devices with high precision and low cost."

The team's platform used a 405-nanometer laser to illuminate a glass palette from underneath, with droplets of different colored photocurable resin materials on the top of the palette. A stationary glass substrate above the palette acted as the location where the 3D model takes shape, with a translational stage moving the palette so that resins can be individually brought to the focus of the laser and attached to the substrate. Two cleaning tanks and an air nozzle for drying were also built into the palette.

After a resin has been polymerized, the moving stage transfers the 3D item on its substrate to one of the cleaning tanks where it is washed for 10 seconds in ethanol and dried using the air jet, before returning to position for the next resin to be applied.

Get the air bubbles out

The generation of air bubbles as resins are swapped, and hence creation of voids in the finished component, is a particular issue for multimaterial stereoliothography. Until now the best technique for avoiding them has been to reduce the speed at which the forming 3D model is introduced into each new resin.

The Yokohama team tried a different approach, using the translational stage to move the 3D model in a programmed pattern in the horizontal XY plane while it was touching a new drop of resin. With the gap between model and palette set to 30 microns, this movement pushed air bubbles sandwiched between the two surfaces towards the edges of the fabricating area, and ultimately out of it altogether, before the resin was set by the laser.

"All the processes, including 3D printing, resin replacement, bubble removal and cleaning are sequentially carried out using software we developed," said Maruo. "This allows multicolor 3D microstructures to be created automatically."

In trials, the platform was used to create a cube 1.5 millimeters on each side, fabricated from 50 layers of five different resins, requiring the resin exchange to operate successfully 250 times over six hours. The researchers also showed that adjusting the number of layers of multicolor resins could create microstructures with varying colors.

"This method can be applied not only to multicolor resins but also to a wider variety of materials," concluded Maruo. "Mixing various ceramic micro- or nanoparticles with a photocurable resin can be used to 3D-print various types of glass. It could also be used with biocompatible ceramic materials to create scaffolds for regenerating bones and teeth."