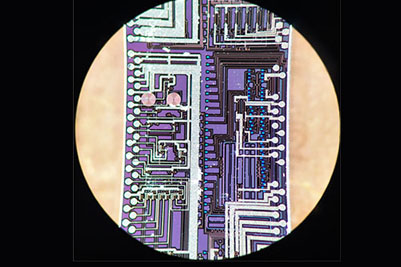 Researchers at the University of Bristol, UK, have developed a new CMOS-compatible silicon photonics photon source that satisfies all the requirements necessary for large-scale photonic quantum computing. The team says this achievement represents “a significant step toward mass-manufacturable ideal single photon sources.”

There is a widespread effort to develop chip-based quantum computers because the mature CMOS fabrication processes used to make today’s computer chips could significantly lower the cost of large-scale quantum information processing.

Although researchers have demonstrated many of the components needed to make quantum computers in silicon chips, an on-chip single photon-source has proven challenging because of the stringent demand to create high-quality photons.

Stefano Paesani from the University of Bristol is this week presenting his group’s new research at the all-virtual OSA Frontiers in Optics and Laser Science conference, taking place 14-17 September.

“By demonstrating low-noise photon sources simultaneously meeting all requirements for large-scale photonic quantum computers, we have overcome a crucial challenge that had limited the scaling of quantum photonic technologies,” commented Paesani.

“The techniques developed in this work could speed up the development of mass-manufacturable chip-scale quantum technologies by several years. Such technologies promise enormous computational quantum speed-ups, unconditionally secure communications, and quantum-enhanced sensors.”

As the name implies, single-photon sources emit light as single photons. They are a key component of optical quantum computers, which use the photons to carry data in the form of qubits. Qubits can be in two states at the same time and will interfere, or correlate, with each other, allowing many processes to be performed simultaneously.

Single-photon sources used in quantum computing have very exacting requirements. They must be highly indistinguishable and pure, either near-deterministic or highly efficient, and suitable for mass-manufacturing.

To meet all these requirements, Paesani and coworkers designed a new single-photon source based on inter-modal spontaneous four-wave mixing in a multi-mode silicon waveguide. The inter-modal approach to on-chip photon sources, where an interplay between multiple optical pump fields is used to generate photons, enables novel degrees of freedom to control the photon emission.

By tailoring the geometry of a low-loss multi-mode waveguide and the on-chip temporal delay between the pump fields, the research team showed that the properties of the spontaneous photon emission could be engineered to achieve near-ideal photons.

To test the new design, the researchers fabricated single-photon devices on standard silicon-on-insulator using CMOS-compatible lithography processes on a commercial wafer. Tests of the devices revealed that the multi-mode waveguides significantly reduced transmission losses, enabling an intrinsic heralding efficiency of the source of approximately 90%. A high heralding efficiency is necessary to scale up quantum processing.

The researchers also performed on-chip photon interference, which is essential for quantum computations. These experiments produced a raw-data visibility of 96%, the highest reported so far in integrated photonics. This achievement enables on-chip quantum operations between photons at an unprecedented level of precision, opening the possibility to scale-up low-noise photon processing in near-term quantum photonic devices.

The researchers say that the single-photon source could be further improved with a better pump laser and by using a more uniform fabrication process.