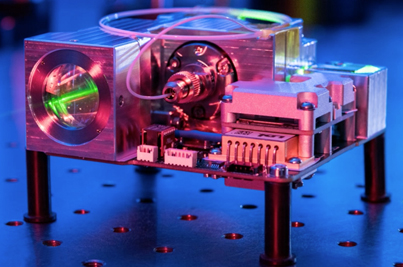 The OSIRIS for CubeSat flight model.

Over the past several years, the space industry has undergone a significant change. The development has moved from large and costly spacecraft to more cost-efficient designs with shorter development times. And while the satellites became smaller, the resolution of compact sensors has increased significantly, which has led to higher data-volumes to be transmitted and thus increasing demands for higher data rates on small satellites.

This is the context of this week’s SPIE Optics + Photonics Digital Forum plenary presentation by Benjamin Rödiger, a Systems Engineer at the German Aerospace Center (DLR), based in Cologne, Germany. The title of his talk is "High data-rate optical communication payload for CubeSats."

He describes his team’s work on a highly compact version of DLR’s optical communication payload OSIRIS for small LEO satellites – calling it “our smallest laser communication terminal.” The DLR’s Institute of Communications & Navigation has developed the OSIRIS (Optical Space Infrared Downlink System) program starting with payloads on the satellites Flying Laptop from the University of Stuttgart and the DLR’s BiROS project.

“Combining miniaturization with the flight-proven developments, the OSIRIS4CubeSat allows integration in a standard CubeSat bus,” said Rödiger. The development of OSIRIS4CubeSat (industrialized under the product name “CubeLCT”) is being conducted in close collaboration with Tesat Spacecom, DLR’s commercialization partner. 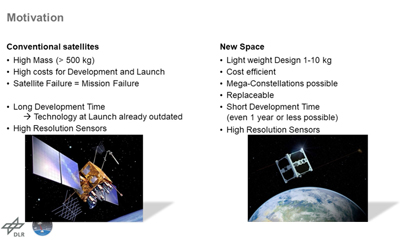 Opportunities: the motivations for the latest developments. Click to expand.

The first implementation will be demonstrated within the PIXL-1-Mission on a 3Unit CubeSat. Furthermore, OSIRIS4CubeSat (O4C) has been chosen to support scientific missions together with university partners in the field of Quantum Key Distribution (QUBE).

In the future, the modular design will enable extensions for optical inter-satellite links. Rödiger’s presentation also gives an overview about the development of the O4C payload and the current status of the PIXL-1- Mission. Furthermore, it describes the adaptation of the payload for the scientific mission QUBE.

Rödiger says, “I want to talk about our latest finished development, which is the OSIRIS for CubeSat terminal for small satellites, for pico- and nanosatellites. Here our goal was to develop a highly compact system, to miniaturize our OSIRIS payloads to fit into the CubeSat standard bus. All our developments are done together in close collaboration with Tesat, which is our industrialization partner in the project.

“Today there is a bottleneck limiting transmission of the increasingly high volumes of satellite data in real time to the ground. It's our goal to break this bottleneck with our laser communication terminals. With these, you will achieve much higher data rates than with RF communication.

“So for the project start, we set our goals to have a highly miniaturized OSIRIS terminal with a high data rate, which fits into a CubeSat standard bus. We encrypted with a fine pointing assembly which can compensate for a pointing error of plus/minus 1 degree. This comes out of common CubeSat buses, which can easily achieve an accuracy of plus/minus 1 degree with 8 AOCS. 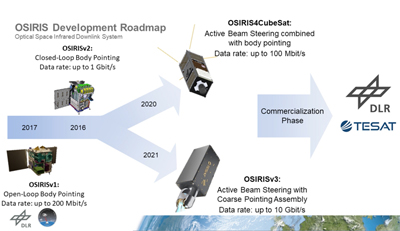 “The main task of the fine pointing assembly is to correct the pointing error of the satellite. Therefore, we need mainly two parts. On the receiver side, we have a four-quadrant diode. It's an InGaAs PIN diode, which acquires the beacon and measures the angular offset. With its four quadrants, it can easily calculate the offset in both x- and y-axes.

“Now that we have designed all major components, we have to bring everything together to one combined payload. The basic idea was to use the electronics PCB as an optical bench. We have all optical components directly placed on top of the electronics. Therefore, we used the copper and the copper material to reduce a terminal expansion, as it has a CTEclose to zero.”

Rödiger then describes commercialization and some future plans for his group’s latest technologies. "Tesat-Spacecom is our industrialization partner. They will get a license to rebuild OSIRIS and sell the payload under the name CubeLCT. Tesat has already sold one of the payloads to an undisclosed customer. The integration was completely done by Tesat. This shows that also not justour development, but also our processes could be directly handed over to the industry," he says. 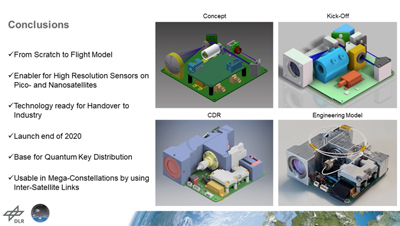 “Therefore, because of the larger distance, more power is needed. That's why the HPLD will be replaced byan optical amplifier. Our microcontroller will be replaced by an onboard computer to have morecomputational power. As the inter-satellite links needs an additional receiver, this will additionally be implemented. The goal is to fit everything into a form factor of 1 unit with the power consumption of less than 20 watts.

“As you can see, this project itself is very ambitious, as it started from scratch to a flight model to a quasi-operational demonstration mission. OSIRIS for CubeSat is now an enabler for high-resolution sensors and pico- and nanosatellites. We want to break this bottleneck of the limited communication capability of RF communication. The development has now progressed to the stage where handover to industry has now been done. The launch of the first mission will be achieved later this year, which we are really looking forward to.”