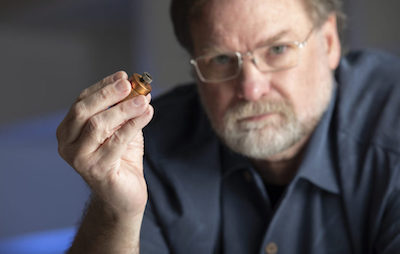 A team from the University of California, Irvine (UCI), working to enhance the established ability of ultraviolet light to disinfect surfaces as part of efforts to combat Covid-19, has turned to one of the most ubiquitous locations of UV sources: domestic Blu-ray players.

The project believes that careful modifications to Blu-ray diodes could allow the diodes to function as deep-ultraviolet laser photon sources, for the disinfection of both surfaces and the indoor atmosphere.

UCI said that the breakthrough could lead to UV light sterilizers that would be considerably less expensive than current medical-grade systems, and to devices that could be readily deployed almost anywhere as hand-held wand devices or possibly as a "light curtain" through which people walk as they enter a room.

"If these sources are successful, I think you could build them into a mask and clean the air that is coming in and out of you," commented Chris Barty of UCI. "Or you could set these things up in the air circulation ducts of major buildings, and the airflow that goes through could be sterilized."

The project is working on ways to convert the standard emission wavelength of Blu-ray diodes, typically 405 nanometers, to the UV-C band of 280 to 100 nanometers, where ultraviolet has a disinfecting effect thanks to its ability to deactivate the DNA of bacteria, viruses and other pathogens.

“There is evidence to suggest that the UV-C band is actually not an issue for us, especially at the shorter wavelengths, because it gets absorbed by dead skin cells or by a teardrop on your eye,” said Barty, head of the UCI Convergence Optical Sciences Initiative.

Hospitals currently use UV-emitting robots based around high-current mercury discharge lamps for disinfection, which not only makes the equipment large and expensive but also means that considerable hazardous UV-A and UV-B light is produced alongside the disinfectant wavelengths of UV-C.

"I would prefer we just destroy it"

Blu-ray diode lasers offer a potential path to a compact, economical solution, since the technology is ubiquitous and priced in the range of tens of dollars per unit.

"This is really more of an applied physics versus a pure physics view of the world," Barty said. "The issue is not whether you can make UV-C light. It's whether you can fundamentally reduce the dollar-per-watt output of a device to a place that it becomes compelling to use UV-C light."

The connection between Blu-ray diodes and biotoxins has been made before. A 2014 project from Spain's Polytechnic University of Valencia used Blu-ray discs themselves as substrates for two types of pathogen bacteria, which were then imaged using the device's standard UV diode.

Although having a different goal to the disinfection intended by UCI, the Valencia project also hinged on the low cost and versatility of the Blu-ray emitters, and their potential for "the development of new systems of analysis used in clinical diagnosis, or be used in the field and in environmental monitoring."

Barty, who is also co-founder of Lumitron Technologies, a UCI spin-out developer of X-ray systems based around laser-Compton technology for high-fidelity imaging, believes that the use of low-cost widely available photonics technologies should form a significant element of plans to stem the Covid-19 pandemic.

"Looking at the current landscape, there is an all-hands-on-deck effort to develop vaccines to prevent Covid-19 infections and drugs to treat people sick with the virus," said Barty. "I would prefer that we just destroy it."