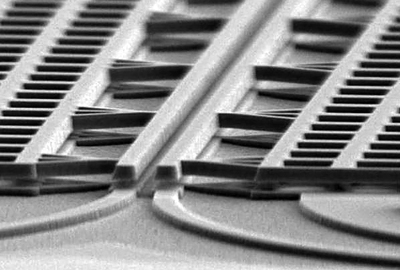 "Nano-metrology lab on a chip" is within reach with the compact, optical sensor.

Researchers at Eindhoven University of Technology have developed an integrated optical sensor, which they say provides increased resolution and enables compact optical sensors – including lasers and detectors for “lab-on-chip” platforms.

“Optical read-out sensors based on optomechanical systems are frequently used in sensing applications such as in atomic force microscopes,” the Eindhoven developers state. “These devices generate sub-nanometer resolution images by measuring the laser light reflected by the deflection of a cantilever over a surface of interest.”

However, traditional laser-based approaches such as those in AFMs can be bulky, which along with the demand for lower cost and higher resolution, is driving the need for an alternative approach.

Thanks to developments in nano-optomechanical systems, compact optical sensors for the measurement of motion, force, and mass at the nanoscale are now possible. A limiting factor though is the need for a tunable laser with a narrow linewidth, which can be difficult to incorporate in such a device.

To get around this problem, Tianran Liu, Andrea Fiore, and colleagues from the Institute for Photonic Integration at TU/e designed a new optomechanical device with a resolution of 45 femtometers (45×10-15m) in a measurement time of a fraction of a second. The developers added, “Crucially, the device has an ultrawide optical bandwidth of 80 nm, removing the requirement for a tuneble laser.” 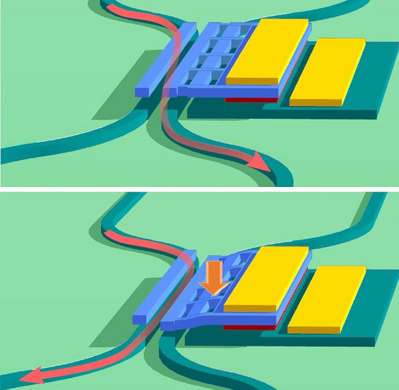 Light passing through the direction coupler before (up) and after (down) actuation.

The sensor is based on an indium phosphide membrane-on-silicon platform, which is suitable for including passive components such as lasers or detectors. The sensor itself consists of four waveguides – with two waveguides suspended above two output waveguides (see diagram, right).

Fabrication takes place via a series of lithography steps to define the waveguides and cantilever, and the final sensor consists of the transducers, actuator, and photodiodes.

One of the key advantages of this sensor is that it operates in a large range of wavelengths, which eliminates the need for an expensive laser on the device. In terms of cantilever deflection, the sensor also replicates the resolution of cantilevers in traditional, but bulky AFMs.

Using this new device as a foundation, the researchers say they are “planning to develop an entire nanometrology lab integrated on a chip that can be used for semiconductor metrology and help in the design of the next generation of microchips and nanoelectronics.”