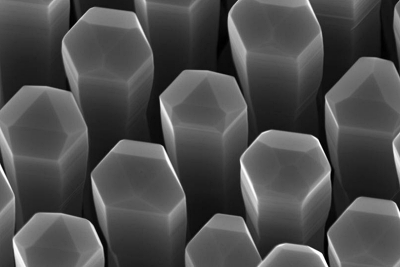 Researchers in Europe have found a way to make silicon-germanium (SiGe) alloys emit light efficiently, a breakthrough that has the potential to revolutionize integrated silicon photonics.

Led by Jos Haverkort and Erik Bakkers from the Eindhoven University of Technology, the “SiLAS” collaboration has just published a paper on the development in the journal Nature.

In that paper, the team explains that by growing SiGe with a hexagonal crystal structure - in place of the normally cubic form - the development of a silicon laser capable of integration with today's chips and photonic integrated circuits is within reach for the first time. One could even be produced before the end of this year.

Although the current work relies on optical stimulation with a laser, the collaboration is confident that it will prove possible to fabricate an electrically stimulated emitter based on the novel crystal material - a development that is essential for integrated photonics.

Crystal growth
Bakkers and his colleagues at Eindhoven have produced hexagonal silicon before, but those nanowire structures were not able to emit light. However, following discussions with SiLAS project collaborators at the Technical University of Munich, they were able to optimize the approach, reducing the level of crystal defects and impurities in germanium-rich alloys.

In the Nature paper, the team explains that it was able to measure a sub-nanosecond, temperature-insensitive radiative recombination lifetime and an emission yield similar to that of the compound semiconductor structures on which conventional semiconductor lasers are based.

“Moreover, we demonstrate that, by controlling the composition of the hexagonal SiGe alloy, the emission wavelength can be continuously tuned over a broad range, while preserving the direct bandgap,” writes the team.

“In the meantime, we have achieved properties almost comparable to indium phosphide or gallium arsenide,” Bakkers said, adding that he believes it is now “only a matter of time” before the team creates a laser emitter based on the hexagonal SiGe material.

“The material quality is improving [rapidly],” he stated in a release from the Eindhoven group. “If things run smoothly, we can create a silicon-based laser in 2020.” 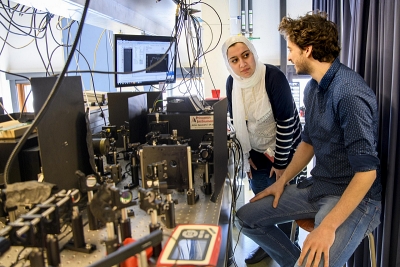 Possible game-changer
If that does happen, it would represent a breakthrough that has eluded optoelectronics researchers for decades, and something that would enable a close integration of optical functionality within electronics.

Bakkers says that such a development would “break open” prospects for on-chip optical communication and affordable chemical sensors based on spectroscopy. Until now, those applications have had to rely on intricate coupling of laser emitters with silicon photonics circuits and integrated devices like modulators, waveguides, and photodetectors.

“That will truly be a major breakthrough,” Bakkers noted. “It will be a game-changer, an invention that could transform the microelectronics industry.”

Munich collaborator Jonathan Finley added: “If we can implement on-chip and inter-chip electronic communications by optical means, speeds can be increased by a factor of up to 1000.

“In addition, the direct combination of optics and electronics could drastically reduce the cost of chips for laser-based radar in self-driving cars, chemical sensors for medical diagnostics, and air and food quality measurements.”

Material challenges
With the €4 million SiLAS project scheduled to run until the end of this year, the team will be working to create a silicon laser, and to figure out how to combine the hexagonal light-emitting structures with the conventional cubic silicon crystal structures used in all electronics applications and fabricated using CMOS processes.

Other members of the SiLAS collaboration are based at universities in Jena in Germany, Linz in Austria, and Oxford in the UK. IBM Research in Switzerland is the sole commercial partner to be involved.

Some of the remaining technical challenges identified in the journal paper include getting rid of the existing compound semiconductor material used as a template on which to grow hexagonal SiGe material - and devising a material platform that is fully compatible with CMOS processes.

“Possible integration routes are strain-induced transformation of [Ge-rich] SiGe, for instance by a dielectric strain envelope, or alternatively by template-assisted selective area growth of the hexagonal phase,” suggests the team.