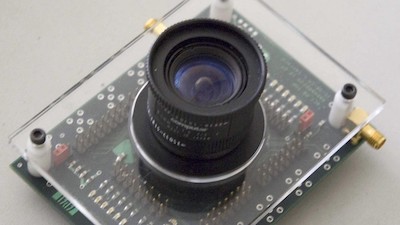 A joint project between Swiss research institute EPFL and Canon has succeeded in developing a megapixel single-photon avalanche diode (SPAD) image sensor, a benchmark said by the team to represent one of the most important milestones in the field for a decade.

Christened MegaX, the breakthrough could point towards large-format time-gated SPAD sensors, and cameras able to take 3D images with increased speed and resolution. The work was published in Optica.

"MegaX is the culmination of over 15 years of research on SPADs, the photodetectors used in next-generation image-sensor technology," commented Edoardo Charbon of EPFL's Advanced Quantum Architecture Laboratory. "It’s something I've been dreaming of for a long time."

Image sensors have represented an important limitation to applications such as Lidar and sub-shot-noise imaging, which ideally need single-photon detection and high timing resolution with low noise and high sensitivity. The sensors used to move towards these goals have to date tended to consist of single pixels or arrays of 1 kpixel at most.

A combination of SPAD technology, in which a photon can trigger a relatively large avalanche current of short duration, and careful time-gating technology using time-to-digital converters (TDCs), has been used to address this limitation, but the crux of the problem has remained the pixel pitch and the amount of functionality per pixel.

The EPFL and Canon project team has now successfully manufactured a 1 Mpixel SPAD, fabricated in 180-nanometer CMOS image sensor technology. Pixels with a pitch of 9.4 microns in 5.75- and 7-pixels per transistor configurations allowed the sensor to be designed with a maximum fill factor of 13.4 percent.

Trials for both 2D and 3D imaging showed the new chip was able to image light and dark objects equally well, thanks to an increase in dynamic range considerably beyond that possible with a conventional high-definition camera, according to the team.

In addition, the sensor allows multi-object 3D imaging, with spatially overlapped multiple reflective objects potentially being imaged individually, thanks to the direct in-pixel time gating architecture that the project designed.

Tests for this particular functionality found that the sensor could register images of both a spherical target and a transparent plate located between the target and the sensor, effectively detecting more than one reflection peak from the objects in view. Normal 2D images did not register the transparent barrier at all.

"To the best of our knowledge, this spatially overlapped multi-object detection with the single-photon time-gating scheme has been experimentally demonstrated for the first time," commented the project in its published paper.

The noise and dynamic range performance of the sensor could now make it useful in a wide variety of industrial applications, including security, automotive and biomedical uses, as well as specialist quantum- and ultra-high-speed imaging regimes. But further research will be needed, not least since 9-micron pixels are relatively large compared to conventional sensors.

"The main obstacle is pixel size, since a regular camera has a pixel size of 0.9 microns but the pixel size in MegaX is ten times larger," commented Charbon.

"Our team is already working on a next-generation MegaX with a pixel size of 2.2 microns, but our goal isn’t necessarily to make MegaX work like a conventional camera. We want to create a 4D camera, capturing three standard dimensions plus time, with as many pixels as possible in order to achieve a higher resolution."