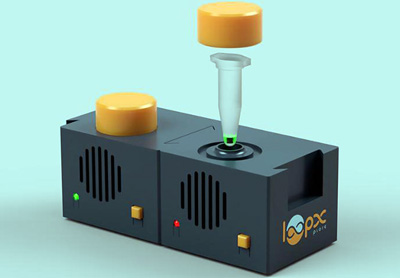 Sensor developer ams is providing its latest sensor technology to Eldim, a Caen, France-based provider of optical metrology systems and related software. The objective is to support the development of a point of care detection solution for Covid-19 testing, based on molecular biology and yielding results in only 40 minutes – instead of the usual hours or days.

A specially developed sensor system based on the ams AS7341L spectral sensor enables spectrally-resolved read out of amplified RNA of the virus particles, which, the company says, “reinforces its position in delivering high-quality professional health diagnostics.”

A team – including Loop Dee Science, also in Caen, a biotech startup focused on point-of-care testing; LRX Technologies, a photonic sensors design company; Eldim; and the University Hospital of Caen Normandy (Virology Department) – has been working on the project for several months.

The resulting solution is the LoopXplore Covid-19 analytical kit and the LoopX, a portable and autonomous professional diagnostics device. Conventional PCR (Polymerase Chain Reaction) testing is fundamental to much of the genetic testing happening today and is currently the most frequently used test for Covid-19. However, the equipment needed for this is costly, specialized, and found only in centralized laboratories.

In contrast, say the team, the new approach from Eldim and partners uses isothermal amplification technology to detect the virus without bulky equipment. Patients can obtain virtually instantaneous and accurate feedback on their health status, which can reduce the spread of the virus.

“The high-precision engineering and design of Eldim, in combination with the technology and clinical input of its partners, plus ams’s sensors, has resulted in a miniaturized readout that is both faster and more flexible than PCR testing, but with-out compromising on precision,” commented Pascal Philippon, Senior VP Sales and Marketing EMEA at ams. 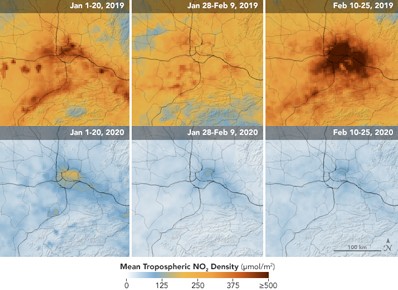 Pollution levels in Wuhan drop – and do not rebound.

Since the Covid-19 pandemic began, space- and ground-based observations have shown that Earth’s atmosphere has seen significant reductions in certain air pollutants. However, scientists wanted to know how much of that decline can be attributed to changes in human activity during pandemic-related shutdowns, versus how much would have occurred in a pandemic-free 2020.

Using computer models to generate a Covid-free 2020 for comparison, NASA researchers found that since February, pandemic restrictions have reduced global nitrogen dioxide concentrations by nearly 20%. The results were presented at this week’s 2020 International Conference for High Performance Computing, Networking, Storage, and Analysis.

“We knew the lockdowns would have an impact on air quality,” said lead author Christoph Keller with Universities Space Research Association at NASA’s Goddard Space Flight Center in Greenbelt, Maryland.

Keller works in Goddard’s Global Modeling and Assimilation Office, which uses high-tech computer models to help track the chemistry of the ocean and the atmosphere, and forecast future climate scenarios. He says, “it was also soon clear that it was going to be difficult to quantify how much of that change is related to the lockdown measures, versus general seasonality or variability in pollution.”

Wuhan, China was the first municipality reporting an outbreak of Covid-19. It was also the first to show reduced nitrogen dioxide emissions—60% lower than simulated values expected. A 60% decrease in Milan and a 45% decrease in New York followed shortly, as their local restrictions went into effect.

“You could, at times, even see the decrease in nitrogen dioxide before the official policies went into place,” said co-author Emma Knowland with USRA at Goddard’s GMAO. “People were probably reducing their transit because the talk of the Covid-19 threat was already happening before we were actually told to shut down.” Once restrictions were eased, the decreases in nitrogen dioxide lessened, but remained below expected business-as-usual values.

The research is ongoing, and the GEOS model data used in this study are publicly available. More information about GEOS can be found here. The following NASA video explains the work and presents some of the results:

Aerosols and the viruses they carry disperse in rooms very quickly and float in the air for hours. Scientists at the Karlsruhe Institute of Technology (KIT) have developed an effective solution to this current threat. The Aerobuster is a simple, compact device that effectively deactivates viruses and other pathogens in room air with UV-C radiation.

“First results reveal that nearly 100 percent of airborne model viruses can be deactivated by our Aerobuster. Thanks to its high air flow rate, Aerobuster is highly powerful, but available at far lower costs than conventional air cleaning systems,” said Professor Horst Hahn, Head of KIT’s Institute of Nanotechnology and one of the inventors of Aerobuster.

“This also applies to all other highly crowded public areas, such as hospitals, residential and nursing homes, restaurants, offices, factory halls, or public transport means and their waiting areas,” added Prof. Hahn says. 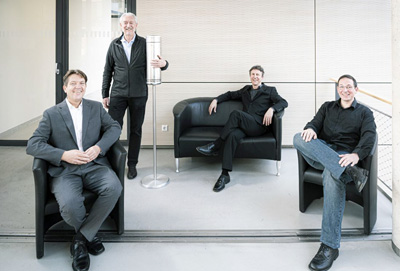 The Aerobuster is about the size of a floor lamp, is lightweight, and can be fixed to a post, ceiling or wall. The system consists of a simple metal tube, a fan of the type used for cooling PCs, a heating module, and a radiator that emits ultraviolet light of a certain wavelength.

“With the help of the fan, air is sucked in. The aerosols are dried and the viruses deactivated using UV-C radiation – a long-established disinfection method,” said Dr. Jochen Kriegseis from the Institute of Fluid Mechanics.

“The waste heat can be used for heating the rooms,” said Dr. Thomas Blank from the Institute for Data Processing and Electronics. The three inventors of the system agree that Aerobuster is an investment in the future, as it may also be used to fight future pandemics or the annual wave of influenza.

In the next step, Hahn and his colleagues from other institutes of KIT plan to build 100 prototypes and to further test and optimize them on site. “With a suitable industry partner, ten thousand devices could be produced within a few weeks,” said Prof. Hahn. The procurement costs for the materials from which the Aerobuster is composed are estimated by the experts to be about €50.