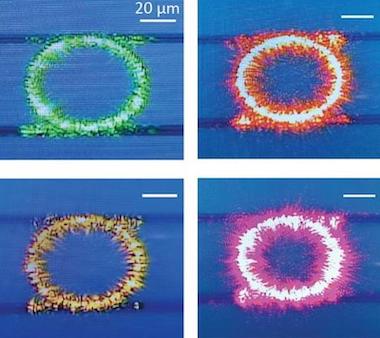 Chip of many colors: visible outputs

Generation of visible laser light on integrated microchips is an important aspect of potential photonics applications in spectroscopy and metrology, and for the scaling up of field-ready manufacturing processes.

Achieving a wide range of wavelengths and integrating the light generation into a photonic integrated circuit platform has been challenging, but optical parametric oscillation (OPO), in which the characteristics of light are changed as it moves through a solid crystal structure, are thought to offer a promising route to overcoming them.

A project at NIST has now demonstrated how third-order OPO in a microresonator based on silicon nitride can be used to generate several wavelengths of visible emission from an infrared source, broadening the range of visible light generated until now by the OPO approach. The work was reported in Optica.

NIST's approach suggests that a range of wavelengths can be accessed using a single, small-scale platform, instead of requiring bulky, tabletop lasers or a series of different semiconductor materials. Constructing such lasers on microchips also provides a low-cost way to integrate lasers with miniature optical circuits needed for optical clocks and quantum communication systems, according to NIST.

The project forms part of NIST on a Chip, a program that miniaturizes NIST's measurement-science technology with the goal of enabling it to be distributed directly to users in industry, medicine, defense and academia.

"Our work represents a major advance in the use of nonlinear nanophotonics to access desired wavelengths in the visible spectrum, and may have numerous applications in spectroscopy, metrology, and quantum science," commented the NIST team.

Previous studies of third-order OPO structures based on silicon nitride for visible light generation only achieved outputs at the long wavelength edge of the visible spectrum, and it remained unclear whether the OPO designs could be tailored to allow access to any other wavelength of interest.

The new project exploited the ability of a carefully designed OPO structure to enhance degenerate four-wave mixing, the nonlinear process in which interactions between two or three wavelengths produce two or one new wavelengths while conserving the energy of the incoming photons. This is the first time that the effect has been used to produce particular visible-light wavelengths on a microchip that has the potential for mass production, according to NIST.

"To create a multitude of visible and infrared colors, the team fabricated dozens of microresonators, each with slightly different dimensions, on each microchip," said NIST.

"The researchers carefully chose these dimensions so that the different microresonators would produce output light of different colors. This strategy enabled a single near-infrared laser that varied in wavelength by a relatively small amount to generate a wide range of specific visible-light and infrared colors."

"The benefit of our approach is that any one of these wavelengths can be accessed just by adjusting the dimensions of our microresonators," commented Kartik Srinivasan of NIST.

Future work will now include access to higher frequencies, including blue and violet light, for which novel OPO designs will be required. Ways to increase the output power, currently limited to between 30 and 40 dB below the power of the pump laser, will also be needed to make the process suitable for broad application in commercial contexts.

"Though a first demonstration, we are excited at the possibility of combining this nonlinear optics technique with well established near-infrared laser technology to create new types of on-chip light sources that can be used in a variety of applications," said NIST's Xiyuan Lu.