So the Institute is developing standards to evaluate and compare Single Photon Detectors to benchmarks. 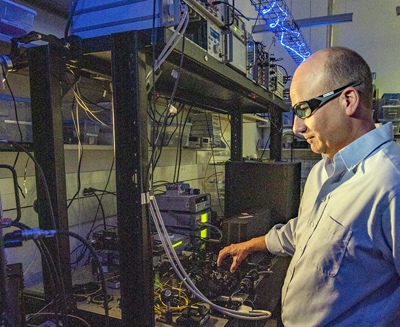 Since the US National Institute of Standards and Technology (NIST) built its first superconducting devices for counting photons in the 1990s, these once-rare detectors have become popular research tools all over the world. Now, NIST has taken a step toward enabling universal standards for these devices, which are becoming increasingly important in science and industry.

Single-photon detectors (SPDs) are now key to research areas ranging from optical communications and astrophysics to cutting-edge information technologies based on quantum physics, such as quantum cryptography and quantum teleportation.

To ensure their accuracy and reliability, SPDs need to be evaluated and compared to some benchmark, ideally a formal standard. NIST researchers have already started to perform custom calibrations for the handful of companies that make SPDs.

The NIST team has just published methods for measuring the efficiency of five SPDs, including one made at NIST, as a prelude to offering an official calibration service. The work is reported in the IOP journal Metrologia.

“This is a first step towards implementation of a quantum standard — we produced a tool to verify a future single-photon detection standard,” said NIST physicist and lead author Thomas Gerrits. “There is no standard right now, but many national metrology institutes, including NIST, are working on this. The aim is to serve as a reference for our planned calibration service.”

NIST says it is “uniquely qualified to develop these evaluation methods” because the institute makes the most efficient SPDs in the world. The institute specializes in two superconducting designs — one based on nanowires or nanostrips, evaluated in the new study, and transition-edge sensors, to be studied in the near future.

The unit of measurement most closely related to photon detection is the candela, which is relevant to light detected by the human eye. Future SI redefinitions might include photon-counting standards, which could offer a more accurate way of measuring light in terms of the candela.

The Metrologia paper details NIST’s use of conventional technologies to measure SPD detection efficiency, defined as the probability of detecting a photon hitting the detector and producing a measurable outcome.

The team ensured the measurements are traceable to a primary standard for optical power meters (NIST’s Laser Optimized Cryogenic Radiometer). The meters maintain accuracy as measurements are scaled down to low light levels, with the overall measurement uncertainty mostly due to the power meter calibration.

The researchers measured the efficiencies of five detectors, including three silicon photon-counting photodiodes and NIST’s nanowire detector. Photons were sent by optical fiber for some measurements and through the air in other cases. Measurements were made for two different wavelengths of light commonly used in fiber optics and communications. Uncertainties ranged from a low of 0.70% for measurements in fiber at a wavelength of 1533.6 nm to 1.78% for over-the-air readings at 851.7 nm.