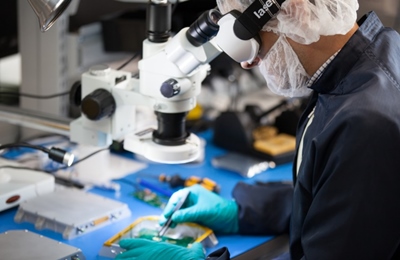 Optical component, subsystem, and system vendor Gooch & Housego has lost nearly a quarter of its stock-market valuation, after the UK-headquartered firm warned that its 2019 profits would be hit by a downturn in the industrial laser sector.

The London-listed company, a key supplier of acousto-optic modulators used in lasers for microelectronics manufacturing, reported in its interim financial results that although sales were still growing overall, it had revised its earnings outlook down for the financial year ending this September.

At £59.7 million, Gooch & Housego’s revenues in the six months ending March 31 were up 7 per cent year-on-year, but adjusted pre-tax profits of £5.4 million dropped from £7 million a year ago. For the full year ending September 2019, pre-tax profits are now forecast to be as much as £4 million lower than previously expected.

Cyclical downturn
After reporting record-breaking annual sales of £125 million and a strong order book last year, CEO Mark Webster and his executive team said that they were confident of continued growth as market conditions remained favorable.

But that picture has clouded – partly as a result of a cyclical downturn in the microelectronics sector, and partly because of the impact of the trade impasse between the US and China.

Industrial laser suppliers including IPG Photonics, Coherent, and MKS Instruments - all of whom Gooch & Housego lists as customers - have reported a slowdown in demand from microelectronics production and China’s machine tool sector, while consultancy firm IHS Markit has characterized the current slump in the semiconductor industry as “the worst in a decade”.

Although Gooch & Housego has been able to diversify its business in recent years through a series of acquisitions and a move up the value chain from optical components to subsystems, industrial applications still account for half of company revenues.

Webster says that he remains confident in the potential of the industrial laser sector’s ability to grow, but in the near term the market is not expected to return to normal levels. As a result, Gooch & Housego’s pre-tax profits for the year ending September 2019 will be between £3.5 million and £4 million lower than previously forecast.

In its 2018 fiscal year, the company had posted pre-tax profits of £18.8 million – up strongly on the prior year and helping to support various acquisitions as well as an increased dividend pay-out.

‘Step change’ for fiber couplers
In contrast to the challenges of the industrial laser sector, Webster noted a “step change” in demand for the firm’s high-reliability fiber couplers – and predicted that demand would grow three-fold between now and 2022.

Also looking solid is Gooch &Housego’s life sciences business. Bolstered by last August’s £22 million acquisition of medical device company ITL, it has more than doubled its turnover compared with a year ago – and now accounts for nearly one-fifth of company sales.

In tandem with the interim results announcement, Gooch & Housego revealed that its current COO Alex Warnock was to leave the company, and would not be replaced directly.

CEO Webster said that during five years in the role Warnock had “transformed” the company’s sprawling operations, and established a modern, scalable structure.

• Following the publication of its half-year report, Gooch & Housego’s stock price plunged in value by more than 20 per cent on the London Stock Exchange. At around 1045p in late trading June 4, it is down from a record high of 1900p reached last September, but after a volatile few months is still only marginally down on its valuation at the start of 2019.