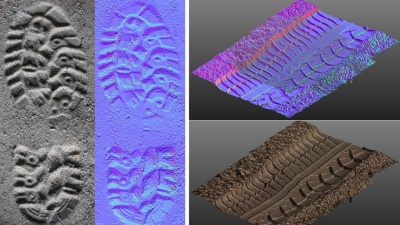 He went this way: 3D scanning of tell-tale impressions.

Now, the use of a portable 3D scanner, developed by the Fraunhofer IOF, in Jena, Germany, such marks can now be secured non-destructively, and within seconds. The new "3DF scanner" will be presented at the GPEC police equipment trade fair from 18th to 20th February of 2020 in Frankfurt am Main (Hall 11.1, Stand E120).

The IOF points out that the information content of conventional 2D scene-of-crime photos is limited: "for example, it is not possible to derive any depth information from them.

Even the plaster impressions of shoe prints and the like has its limits. The original trace is usually destroyed by plastering, and the plaster needs time to harden, especially in a wet or cold environments it hardens only with difficulty."

The portable device works contactlessly and is said to be "easy to handle"; shoeprints, tire tracks can be scanned quickly and without destruction. The 3DF was developed by researchers from the Fraunhofer IOF together with industrial partners.

"The scanner records evidence in three dimensions," commented Roland Ramm, a scientist at Fraunhofer IOF. "At only 4.3 kilograms, it is lightweight, battery-powered and rugged against adverse weather and temperature conditions. It works without physically contacting the site, so the evidence remains intact after scanning."

The device also reliably detects even the smallest features; its resolution is below 200 micrometers. Because more important than the shoe size or brand, for example, are small scratches in the shoe profile, which the criminal investigation department can use to assign a shoe print to a specific shoe. 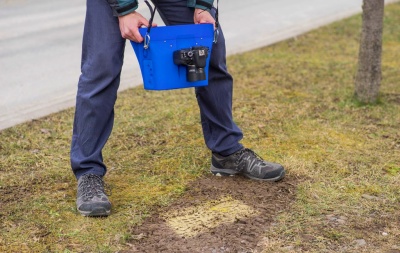 Step on it: rapid scanning with the light-weight 3D measuring system.

In an examination procedure, a forensics officer holds the device over the mark, such as a shoe print, and starts the recording. At the same time, a camera attached to the scanner takes a photo. A few seconds later the user sees a preview image on the integrated display. The operator can then preview whether the image section is correctly captured, if the image is sharp, and start to monitor and process the early results.

Then, a detailed evaluation follows in the laboratory, as that is typically carried out by expert colleagues. Here, for example, the length of an imprint or the depth of the shoe profile can be analyzed, and comparisons can be made with traces from other crime scenes or a particular suspect.

To measure the tracks three-dimensionally, the researchers have relied on the pattern projection. Each of 3DF's two cameras, which record the track from slightly different angles, takes an image, while a small projector beams a stripe pattern onto the track.

Geometric statements can be made based on the deformation of the beamed pattern. The measurement margin of uncertainty is only 20 to 100 micrometers. The validity of the data is thus at least as high - if not higher - than that of data obtained from plaster molds.

The device is being marketed by the Italian company Gexcel, which also offers the appropriate evaluation software. Interested police authorities can also borrow the portable 3D scanner from Fraunhofer IOF for test purposes.

At the General Police Equipment Exhibition & Conference (GPEC) trade fair in Frankfurt, Germany,from February 18 to 20, 2020, the IOF researchers will present the 3DF Scanner (Hall 11.1, Stand E120). Visitors will be able to try out the device live on various tracks, and the evaluation software from Gexcel can also be tested using data from simulated crime scenes.