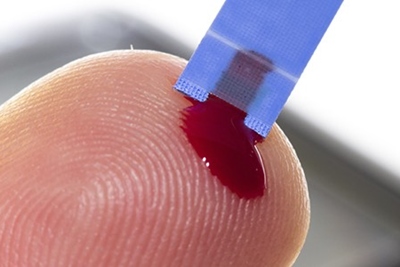 After seven years of development, a research team in Malaysia says its photonics-based non-invasive blood glucose monitor is close to a commercial roll-out.

Emerging from the photonics technology laboratory within the “MIMOS” national applied R&D center, the “GlucoSenz” prototype is said to combine near-infrared spectroscopy and chemometric techniques to measure absorbance through a person’s thumb.

Miniaturization
According to a MIMOS release, the technology represents the world's “first clinically-tested non-invasive blood screening prototype”. The team adds that with ethical approval already received from the relevant Malaysian authorities, they expect to commercialize a miniaturized version of the device by the end of next year.

“To use the device, the thumb is placed on the thumb module, where light will be projected,” they explain. “The reflected light is then collected by a fiber-optic probe that guides the light to a detector. The light spectrum is then analysed by a built-in software module. The blood glucose level result in mmol/l then appears on the LCD display.”

The opportunity for near-infrared spectroscopy in blood glucose monitoring has long been eyed by photonics technology developers, with teams at Ghent University in Belgium, Leeds University in the UK, and Princeton University in the US among those to have worked on similar approaches that promise to end the need for diabetics to pierce their skin to get a reliable measurement from a drop of blood.

Other technologies based around radio waves, electrical current, sweat monitoring, and even smart contact lenses are also under development. But according to an October 2017 report in The Pharmaceutical Journal, none of those have proved effective thus far.

Technology licensed
The current MIMOS device is the result of a seven-year research and development effort within the center’s photonics technology laboratory, with Shahiman anticipating a significant impact on healthcare providers and economic benefits, alongside patient comfort and convenience.

“A non-invasive, non-intrusive glucometer will protect healthcare personnel from possible occupational exposure to infected blood,” Shahiman added. “Hospitals and clinics will also reduce cost in the long run as alcohol swabs, lances and test strips will no longer be used.”

Work to miniaturize the device is already under way, with a target to produce the first mini prototype for trial by the middle of 2019. The technology platform has also been licensed to an unspecified local medical device company.

“GlucoSenz would potentially replace conventional glucometers due to its ease of use and high accuracy,” Shahiman said. “Countries with high rates of diabetes and obesity should keep a watch on this product as it has a huge market potential.”

Established a decade ago, initially with a focus on quantum cryptography, the MIMOS photonics technology lab is now largely dedicated to sensor development for applications in food safety, the environment, and aquaculture, as well as life sciences.

Other technology areas investigated at MIMOS include microelectronics, with the national lab boasting expertise in MEMS and semiconductor wafer fabrication and test.