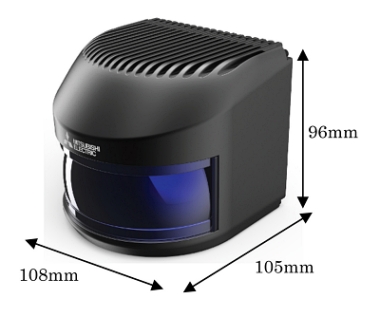 Japanese technology giant Mitsubishi Electric says it has developed a compact lidar system aimed at use in future autonomous vehicles.

The Tokyo firm claims that its selection of an optical MEMS-based approach achieves an extra-wide horizontal scanning angle that can detect the shapes and distances of objects ahead of a self-driving vehicle.

“The new lidar solution irradiates objects by laser and uses a dual-axis (horizontal and vertical) MEMS mirror to scan for the reflected light, generating three-dimensional images of vehicles and pedestrians,” it announced. “Mitsubishi Electric expects this compact, low-cost solution to contribute to the realization of safe, secure autonomous driving.”

Because it relies on collecting pulses of reflected laser light to map the surroundings of a moving vehicle, one of the requirements is to maximize light collection. The Mitsubishi team has chosen to do that by using a MEMS mirror with a large surface area.

On top of that, a wide scanning angle is needed for accurate monitoring of the vehicle’s periphery. In response, Mitsubishi Electric says its approach incorporates what is claimed to be the industry's largest electromagnetic MEMS mirror, measuring 7 mm by 5 mm.

Reduced system weight
Counter-intuitively, that relatively large MEMS component is said to be based on a unique structure that reduces the overall weight of the system, but without sacrificing rigidity.

“The lightweight design and high electromagnetically generated driving force allows the mirror to achieve large horizontal movement of ±15 degrees,” states the firm. “Vertical movement is currently ±3.4 degrees, and Mitsubishi Electric aims to increase this to ±6.0 degrees or more by improving the beam structure of the MEMS.”

Mitsubishi Electric adds that the key component can be manufactured in large quantities on a silicon substrate, using conventional semiconductor processing technology. Comprising fewer parts compared with lidar mirrors driven mechanically, it should also be more durable than older approaches to lidar.

Among the optics-related technological features of the approach is the use of multiple laser light sources, photodetectors and lenses. This helps to suppress optical vignetting, and also means that the laser beam is not distorted by any of the system’s internal components, explains Mitsubishi Electric.

While the current design’s optical transmission and reception mechanism already yield a wide horizontal scanning angle, the company’s development team is expecting to achieve a vertical scanning angle exceeding 25 degrees in the future. If this effort is successful, it would allow a single lidar to “see” vehicles and pedestrians in much closer proximity than is possible with conventional approaches.

The team is also be looking to shrink the size of the system. Currently occupying a volume of just under a liter, which the company attributes to “optimal arrangement” of its signal processing circuitry, power supply circuit, and optical transmission/reception mechanism, the aim is to reduce that size to just 350 cm3, or less.

Race for the prize
Along with scores of other companies, Mitsubishi Electric is looking to establish itself in a market that analyst IDTechX reckons will be worth $5.4 billion by 2030.

In its October 2019 report IDTechX identified 34 automotive lidar companies in Asia (including no fewer than 20 startups in China alone), alongside 19 in Europe, and 48 in North America. As yet, there has been little to no shake-out of those competitors, but by 2030 it is inevitable that only a few will remain as the market matures and consolidates.

That consolidation will revolve around which of the lidar technology options wins out in the end. In recent months developers of coherent lidar systems, which rely on a frequency-modulated continuous-wave (FMCW) regime rather than the more conventional pulsed approach, have attracted more attention and funding.

Though much more technologically demanding than pulsed time-of-flight systems, coherent lidar would be analogous to the way that existing radar systems work. It also offers the potential for chip-sized systems capable of long-range operation and the ability to use Doppler effects for directional sensing, and Intel is known to be working on this approach.

In its report, IDTechEx identified four important technology choices that every lidar player and lidar user must make, namely the measurement process (i.e. time-of-flight or continuous-wave), as well as the specific laser, beam steering mechanism, and photodetector deployed.

“The beam steering mechanism is the most complicated and critical choice,” it concluded.