Neuropa Project aims to modulate neural pathways in the brain 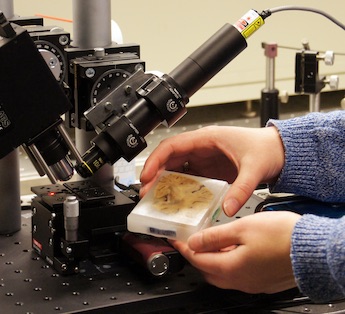 A project launched under Europe's Horizon 2020 program aims to develop a non-invasive means of alleviating long-term dysfunction in the brain, and address specific brain disorders such as Huntington's disease and Alzheimer's disease.

The three-year Neuropa project, coordinated by Edik Rafailov of the Aston Institute of Photonics Technologies (AiPT) at Aston University, is supported by a grant of €3.6 million from Horizon 2020 and will develop a technique termed phytoptogenetics, in which the action of laser light can control the action of neurons.

If successful, the project's work could be a valuable tool in efforts to slow the progression of neurodegenerative conditions, for which at present there are few effective therapies.

"Non-invasive control of dysfunctional neural pathways is a hugely attractive prize to be obtained for medical practice," commented Rafailov.

"Currently methods to address brain dysfunction can involve very invasive procedures, and our aim to is establish a viable and flexible technology that achieve significant results by shining a laser beam instead."

Optogenetics, in which light is used to control neurons that have been genetically modified to express light-sensitive ion channels, is an award-winning and increasingly important biophotonic technique. Neuropa intends to develop a variant approach employing phytochromes, light-sensitive proteins akin to the photo-sensitive receptors found in plants.

"Novel phytochromes will enable modulation of expression of specific genes, selectively and non-invasively delivered and targeted to cortical neurons in specific cortico-subcortical loops," noted the project in its Horizon 2020 proposal.

"Novel compact near-IR laser sources and a diffusing wave spectroscopy monitoring system will be developed to enable non-invasive bidirectional control of the phytochromes by two-photon excitation. We have assembled a consortium of phytochrome engineering, gene delivery, laser photonics and detection experts, cellular, in vivo and behavioral neuroscientists, together with drug discovery expertise. We envisage progress to human use within 15 years."

A societal and healthcare challenge

Project partners include the Optoelectronics and Measurement Techniques research unit (OPEM) at Finland's University of Oulu, which has ongoing research projects underway into methods of monitoring brain hemodynamics and the manufacture of biotissue phantoms as optical analogs of tissues.

"These phantoms are used for calibration of optical measurement techniques and assessment of some specific parameters that are not easy to assess at in vivo measurements, for example the dose of optical radiation that the brains are exposed to during the transcranial illumination," commented Alexander Bykov of OPEM.

The University of Bayreuth is also a member of the consortium, providing expertise in the expression, purification and handling of phytochrome photoreceptors, along with the photochemical characterization of sensory photoreceptors.

Other partners include Aston University's Neuroscience Institute; and the University of Barcelona, where a research group investigating the pathophysiology and treatment of the neurodegenerative disorders is currently providing "an international reference for the study of Huntington’s disease and other basal ganglia disorders," according to the project.

If successful, the Neuropa project could be good news for individuals suffering from neurodegenerative disorders, whose treatment is currently aimed at alleviating symptoms rather than effecting a potential cure.

"There is an enormous human toll of brain disorders in Europe, with an estimated 83 million people affected," said Edik Rafailov. "Through Neuropa we hope to bring a transformative approach to address this great societal and healthcare challenge."