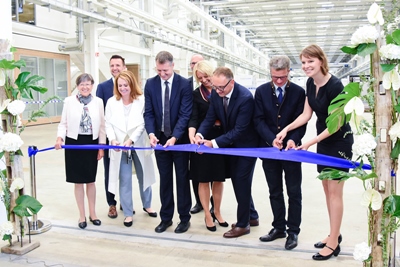 Known as “GE Additive Lichtenfels”, the site was officially opened by the Bavarian Minister of Sciences, Bernd Sibler. It is expected to employ 700 people, once construction at the campus is completed.

Sibler said at the opening ceremony: “In Bavaria, global players find exceptional conditions for successful and future-forward investments to take to the world. The opening of the new GE Additive Lichtenfels facility in Upper Franconia is one such example.

"It is a great win for the people in the region and there many valuable opportunities for business and science to cooperate. The future of the additive manufacturing industry is being shaped in Lichtenfels.”

Global center
Built at an expected cost of €105 million, the Lichtenfels campus brings together research and development activity with production, service, and logistics operations. GE said previously that the site would become its “global center” for production of 3D metal printing machines, with a capacity four times that of its prior capability.

“The transition of production from the current Concept Laser site to the new facility is well under way and will continue throughout 2019,” said the firm. “The office block is still under construction - [it] is scheduled for completion in 2020 - with remaining teams relocating shortly thereafter.”

“There has been a lot of interest in the building over the past three years, both locally and from our customers. We want this modern, lean manufacturing production facility, here in Bavaria, to become a global focal point for the additive industry.

“We have created a collaborative environment for our customers and our teams. And, making the campus a great place to work for our people has been a top priority from the early planning stages.”

Founded by the Herzogs back in 2000, Concept Laser developed its “LaserCUSING” powder-bed laser melting process for initial applications in medicine, aerospace, and dentistry. In late 2016, GE’s aviation business acquired 75 per cent of the firm, which has subsequently become part of the broader GE Additive unit.

At the other end of its offering, the entry-level "MLab Cusing" tools use a 100 W fiber laser to produce much smaller and more delicate metal parts.