The chips are down (again) says analyst IHS Markit

Semiconductor sector crash continues in the first half of 2019 as market posts worst figures for a decade. 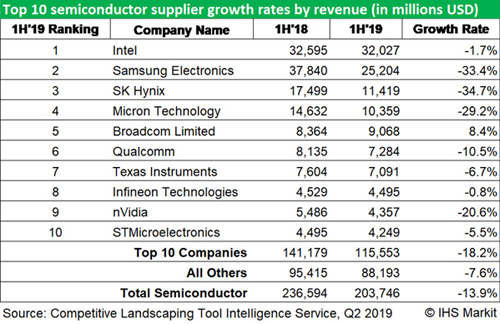 Industry analyst IHS Markit introduces its latest analysis of the semiconductor sector’s business in the six months to June, 2019, with an ironic inverted compliment: “A number of superlatives can describe the semiconductor industry’s performance in the first half — all of them extremely negative.”

This latest tale of woe from IHS Markit follows the same pattern set by the firm's similar gloomy assessment, published at the end of May, 2019.

The fortunes of the chip business are intrinsically bound to those of the photonics sector with many laser and optics systems involved in all stages of the R&D, manufacturing and testing of microelectronics components.

IHS Markit reports that semiconductor sales during H1 2019 “plunged by 13.9 % compared to a year earlier, the biggest drop in a half since the first half of 2009, exactly a decade ago.”

Major chip suppliers have suffered their worst revenue declines in years, 10 years in some cases. Key semiconductor product areas also experienced the largest drops in demand since 2009. Global semiconductor revenue in H1, 2019 totaled $203.7 billion, down from $236.6 billion in the H1 2018. HIS Markit continued its gloomy review: “This represents the worst performance since the market declined by 26.5 % in the first half of 2009.”

“It’s hard to overstate how bad things were for semiconductor suppliers in the first half,” commented Ron Ellwanger, senior research analyst at the company. “Every region, almost every product category and nearly every application market suffered declines during the period. As a result, nine of the top-10 chip suppliers and 17 of the top-20 suppliers saw their revenues drop during the first six months of the year. From just about any perspective, the first half represented the worst six-month performance for the semiconductor market in a decade.”

Among the top-10 chip suppliers, SK Hynix took the biggest hit in the first half, with chip revenue dropping 34.7% year-over-year, a 10-year worst performance for the company. However, fellow South Korean supplier Samsung was close behind, with sales falling by 33.4%. U.S. chip maker Micron was the third-biggest revenue decliner, with a drop of 29.2%. All three suppliers were afflicted by the precipitous drop in the memory segment, which fell by 36.4% — the largest decline of any major product category and, once again, the worst results for a half-year since 2009.

The other top-10 suppliers mainly serve non-memory markets, so their losses were somewhat constrained but most of these still suffered declines. nVidia’s revenue dropped by 20.6% as it faced intensifying competition in the artificial intelligence (AI) graphics processing unit (GPU) market.

Qualcomm’s revenue fell by 10.5%, due to the oversaturated cell phone market, which led to excess inventory at this the chip supplier; its days of inventory increased by 10 days, or 15% compared to Q2 2018. Semiconductor market leader Intel managed to mitigate its losses, seeing a mere 1.7% decline due to its strong performances in wireless and industrial markets.

Of this sector, Ellwanger commented, “To understand what’s happening in memories, just look at the data-processing market, where revenue plunged 19.5 percent year-over-year in the first half of 2019. This year has seen a major decline in the expansion of the cloud, data centers and enterprise servers. Again, this has caused major excess inventory in the market. Another factor behind the downturn is soft demand for cell phones.”

However, the downturn has not been limited to memory, said the analyst. Other sectors hitting 10-year records in terms of revenue declines include logic, sensors and actuators. The market report states: “Excluding memory, microcomponents were down 4.2 percent, logic ICs fell by 4.8 percent, analog ICs declined by 6.1 percent, discretes decreased by 1.9 percent and sensors and actuators fell by 2 percent. Optical was the only area to expand, with revenue rising by less than 1 percent.

Application markets that purchase semiconductors also were in the red in the first half. Data processing fell by 21.9 percent--the biggest decline of any market. Wireless communications was next, with a 15.6 percent drop, followed by consumer electronics, with a 14.7 percent decrease. Industrial electronics fell by 8.6 percent, Automotive by 4.4 percent and wired communications by 0.3 percent.

Some signs of hope

While the news was almost uniformly bad, said IHS, there is a slight sign of optimism contained within IHS Markit’s second-quarter semiconductor ranking results: “Overall semiconductor revenue increased by 1 percent in the second quarter compared to the first,” it stated, “While such a sequential increase is a seasonal pattern that typically occurs in the chip market every year, the appearance of second-quarter growth comes as a positive sign amid the terrible results of the first half of 2019.