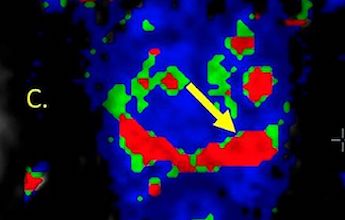 Initial results from a clinical trial in which laser-excited gold-silica nanoshells (GSNs) were used to ablate low- to intermediate-grade tumors within the prostate has indicated the potential value of the technology as a therapy for the condition.

Sixteen patients were assessed in a study sponsored by Nanospectra Biosciences, the Houston-based developer which believes an ablation procedure using its AuroLase technology could be a route to anti-cancer therapies in several areas of the body. The study was reported in PNAS.

"As the first ultra-focal therapy for prostate cancer, AuroLase has the potential to maximize treatment efficacy while minimizing side effects associated with surgery, radiation, and traditional focal therapies," said David Jorden, CEO of Nanospectra.

"We are encouraged by the clinical success of our feasibility study to date and look forward to the initiation, potentially next month, of the pivotal study with an expected cumulative treatment population of 100 subjects."

The roots of AuroLase go back to the early 2000s, and fundamental research into the possibility of using gold nanoshells for cancer therapeutics by Naomi Halas and Jennifer West at Houston's Rice University.

Their work showed that silica nanoparticles surrounded by a thin gold shell could be tuned to absorb near-IR light and covert it to therapeutic levels of heat. If the particles are congregated at a tumor site, the heat will ablate the cancerous tissue while thermal damage to the surrounding areas in minimized.

Nanospectra Biosciences was spun-out from Rice University in 2002 to exploit the IP, and commercialize particle-based therapies for selective thermal destruction of tumors.

In a 2016 technical briefing, the company described its AuroShell particles as being 150 nanometers in diameter, with a central silica core coated in a 12 to 15 nanometer shell of gold. The particles absorb light between 750 and 800 nanometers, although the optical resonance can be tuned by varying the core and shell thickness.

During treatment, a solution containing AuroShell particles is infused into the subject's bloodstream and allowed to collect in the target lesion. Laser light is then delivered using an optical fiber inserted near or directly into the tumor, causing cell death at the point of irradiation.

Initial clinical trials of the technology took place in 2008, applied to eight patients with refractory or recurrent tumors of the head and neck. Other trials have included a 2012 pilot study on treatment of primary or metastatic lung tumors.

The newly completed study on the treatment of prostate tumors in sixteen men aged 58 to 79 was carried out at New York's Mount Sinai hospital. It found that the ablation zones targeted by GSN-mediated focal laser ablation were negative for tumor cells in 87.5 percent of lesions after 12 months.

Announcing the results, Nanospectra commented that compared with other focal ablation treatment modalities, laser ablation has the advantage of generating accurate, predictable, and homogeneous ablation without causing collateral damage to adjoining critical structures.

In particular, GSN-directed ablation builds on the initial lessons learned from laser interstitial thermal therapy, a direct laser ablation technique which relies on thermometry or thermocouples to monitor temperatures within the target and surrounding tissues, and which runs a risk of unintended thermal damage.

AuroLase should allow wider ablation margins to ensure adequate lesion coverage, while at the same time limiting the area of successful ablation to tissues where GSNs are concentrated, according to the company. These qualities could help the technology to have significant clinical impact, given the impetus to find targeted and less invasive therapies to tackle rising incidence rates of cancers.

"Jennifer West and I initiated development of the gold-silica nanoshells nearly 20 years ago," said Naomi Halas, co-founder of Nanospectra Biosciences. "By varying the thickness of the gold outer shell, we demonstrated that we could tune the nanoshells to interact with specific wavelengths of light. By tuning the resonance beyond the visible and into the near-infrared region, we opened the door to a wide range of applications in nanomedicine."