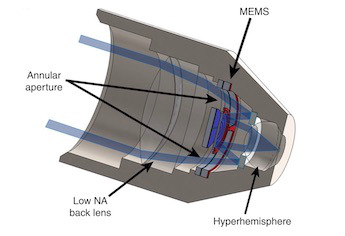 Smaller and more versatile laser confocal microscopy platforms would potentially be of great value for in vivo imaging of live biological specimens, in scenarios where the size of conventional platforms can be an inconvenience.

Miniaturization of the scanning mechanism itself would be an important step along this path, and current advances in the design and construction of microelectromechanical systems (MEMS) offer one route to achieving a reduction in both size and complexity.

A project at Montana State University (MSU) has now demonstrated a microscope objective lens that employs an integrated MEMS device within the objective to perform biaxial scanning, axial focus adjustment, and control of spherical aberration. The work was published in Nature's journal Light: Science & Applications.

The new optical system places a 3D beam scanner within the objective, between a high-NA hyperhemisphere front element and a lower-NA back lens group. It employs a recently developed hybrid polymer/silicon MEMS three-dimensional scan mirror, according to the team, featuring an annular aperture that allows it to be coaxially aligned within the objective lens without the need for a beam splitter.

David Dickensheets of MSU commented that although "MEMS-in-the-lens" has been the subject of some prior research, a more common method has been to position a suitable MEMS device outside the objective, either before it or after it in the optical design.

"The usual approach has been a MEMS scanner positioned before the objective lens, taking the place of some other scanning method such as a galvo scanner," he said. "But the lens itself must then work well over a range of beam angles, corresponding to the field of view in the tissue."

Putting the MEMS after the objective lens instead does allow the lens to be small, and therefore simple, but then requires a long working distance between the lens and the tissue to insert the scanner. This can negate the advantage of a small lens in the first place, and limit the numerical aperture of the system.

A MEMS element in the objective itself allows it to perform the lateral scanning needed to form the image; change the focus of the beam by adjusting its curvature; and make the fine adjustments needed to correct spherical aberration, which are the dominant optical aberrations at high NA.

"MEMS-in-the-lens is a compromise, with the MEMS scanner deflecting a converging beam—rather than a collimated beam—at low numerical aperture, followed by a final high numerical aperture lens that can be simpler and smaller," said Dickensheets.

"What makes this work well is the active surface of our MEMS scanner, which can correct for spherical aberration dynamically while it is scanning. Because the mirror can focus and adjust spherical aberration independently and quickly, it can take care of much of the work that a conventional microscope objective lens must do with extra glass elements. Putting the MEMS in the lens effectively means leaving glass out of the lens, and leads to a more compact and versatile solution."

In bench-top trials, the objective was successfully used to demonstrate imaging of a structured high-reflectivity film, a sample of human cheek cells, and confocal sectioning of suspended polystyrene beads. The resolution and field of view were comparable to more conventional confocal microscopes with a similar numerical aperture, according to the project, and point towards the feasibility of a fully miniaturized platform.

The new architecture could prove valuable in several scenarios where high-NA microscopy is an advantage, such as the use of endoscopic microscopes for diagnosis of cancer, and there could be significant advantages to using architectures like the MSU device for optical biopsies in which tissues are examined without being removed from the body.

"Optical biopsies looking for skin cancer are today carried out using reflection confocal microscopy, eliminating the need for physical biopsy and delivering on-the-spot diagnosis," said Dickensheets. "But the instruments are large, so it doesn't translate well to the GI tract or other target tissues that we would use an endoscope to reach. This innovation can provide a path toward miniaturizing that equipment, while preserving and even enhancing its optical performance."

It may also encourage the tackling of fundamental biological questions through forms of "ambulatory animal microscopy," whereby optical imaging would be carried out on living animals without the need to bring them into a laboratory at all.

"Anytime we want to know about biological systems at the microscale, we have to take the tissue out of the animal, or else sedate the animal, surgically prepare it, and hold it still so we can use a conventional microscope to look at it," commented Dickensheets. "An ultra-miniature, implantable microscope might allow us to see what cells are doing while an animal is going about its daily activities. This technology can play a role in such systems."