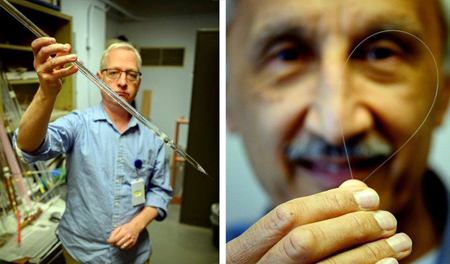 Scientists at the U.S. Naval Research Laboratory (US NRL), Washington, DC., have devised a new process for using nano-particles to build powerful lasers that are more efficient and safer for human eyes.

They have achieved this using rare-earth-ion-doped optical fiber. Essentially, it is a process using laser light pumping a silica fiber infused with holmium ions. According to Jas S. Sanghera, who heads the NRL’s Optical Materials and Devices Branch, the team has achieved an 85 percent efficiency with the new process.

“Doping just means we’re putting rare earth ions into the core of the fiber, which is where all the action happens,” Sanghera explained. “That’s how we’ve produced this world record efficiency, and it’s what we need for a high-energy, eye-safer laser.”

According to Colin Baker, research chemist with the Optical Materials and Devices Branch, the lasing process relies on a pump source--most often another laser—which excites the rare earth ions, which then emit photons to produce a high quality light for lasing at the desired wavelength.

“But this process has a penalty,” Baker said. “It’s never 100 percent efficient. What you’re putting in is pump energy, not the high quality light at the wavelength you want. What’s coming out is a much higher quality of light at the specific wavelength that you want, but the remaining energy that isn’t converted into laser light is wasted and converted into heat.”

That loss of energy ultimately limits power scaling and the quality of the laser light, which makes efficiency particularly important. With the aid of a nano-particle dopant, the team has achieved an efficiency level of 85 percent with a laser that operates at a 2µm wavelength, considered a more “eye-safe” wavelength, compared with the traditional 1µm.

The danger arises from the potential of scattered light to be reflected into the eye during a laser’s operation. Scattered light from the path of a 100kW laser operating at 1µm, such as arises from using a ytterbium dopant, can cause significant damage to the retina, leading to blindness. With an eye-safer laser, operated at wavelengths longer than 1.4µm, the danger from scattered light is considerably lessened.

“The solution was some very clever chemistry that dissolved holmium in a nano-powder of lutetia or lanthanum oxide or lanthanum fluoride to create a suitable crystal environment for the rare earth ions,” said Sanghera. “Using bucket chemistry to synthesize this nano-powder was key in keeping the cost down.”

The particles of the nano-particle powder, which Sanghera’s team had originally synthesized for a previous project, are typically less than 20nm. “Additionally, we had to be able to successfully dope these nano-powders into the silica fiber in quantities that would be suitable to achieve lasing,” Sanghera added.

At the Optical Materials & Devices Branch, Sanghera’s team are working with a room-sized, glass-working lathe, where the glass that will eventually become the fiber is cleaned with fluorine gases, molded with a blow torch and infused with the nano-particle mixture – what the scientists call a nanoparticle slurry. The result is a rare-earth-ion-doped, one-inch diameter, glass rod, or optical preform.

Next door, scientists use a fiber pulling system to soften the preform with a furnace and elongate it, in a process akin to pulling taffy, into an optical fiber. Sanghera’s team has already submitted a patent application for the process. Among the potential applications they envision for the new specialty fiber laser are high powered lasers and amplifiers for defense, telecommunications and even welding and laser-cutting.

“From a fundamental perspective, the whole process is commercially viable,” said Sanghera said. “It’s a low-cost process to make the powder and incorporate it into the fiber. The process is very similar to making telecom fiber.”