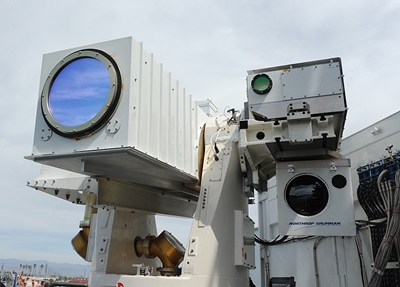 The deal formally brings together two firms that were both founded or co-founded by the same person - current AOS CEO Stephen McCahon - and which have worked together extensively in the past.

Although full terms were not disclosed, a US Securities & Exchange Commission (SEC) filing detailing parts of the acquisition agreement identifies an “asset purchase agreement” worth $2.5 million in cash, payable in the form of a promissory note.

CEO turnover
AE, which according to another recent filing has no employees of its own and rents only a tiny 190 square-foot office space in Tucson, says that the acquisition will add expertise in ultrashort-pulsed lasers to its current patent portfolio in high-performance lasers and high-voltage electronics, which it is aiming at applications in directed energy weapons.

Pending the deal’s completion McCahon will serve as the joint entity’s chief scientist, as a full-time consultant under a three-year contract. Prior to establishing AE and subsequently AOS, McCahon worked in directed energy weapons development for Raytheon.

The AOS acquisition follows a disruptive period at AE. In March 2018 its previous CEO George Farley was fired after arranging what a group of company investors determined to be “egregious and highly toxic loans”. A lawsuit is ongoing.

Thomas Dearmin, an original AE co-founder with McCahon, became interim CEO after Farley was fired, but in August last year Dearmin died. AE’s directors then raised $2.55 million in a sale of shares to help recoup cash used to pay off the loans, before appointing Greg Quarles as the company’s new CEO in April. As well as previously being a member of AE’s scientific advisory board, Quarles was chief scientific officer at The Optical Society (OSA) until the AE appointment.

Although it initially earned tens of millions of dollars in research contracts involving the US military, back in 2012 the company switched its focus away from the defense sector, instead targeting commercial applications and exhibiting its "Wild Cat" ultrafast lasers at the SPIE Photonics West event.

But that switch appears to have been unsuccessful. In the past two years AE has posted zero revenues, reporting net losses of $0.8 million and $3 million for 2017 and 2018 respectively.

Laser ‘lightning’
The company is now pinning its hopes on “laser-guided energy” (LGE) and laser-induced plasma channel (LIPC) technologies, which it believes could become useful in the emerging field of laser and directed energy weapons.

It claims to have developed the underlying laser technologies that would allow a user to precisely control the direction, range and magnitude of such electrical energy. AE explains that the approach creates so-called “laser filaments” as the energy passes through the atmosphere and ionizes oxygen molecules, in turn generating plasma channels that permit transmission of electrical energy.

“Our development of LGE has thus led to a third directed energy technology, creating a generational opportunity for a completely new weapon system development,” states the firm, pointing out that it owns the critical intellectual property underpinning this particular approach.

“The unique properties and demonstrated target effects of LGE allow for mission areas and applications that are not accessible to either high-energy lasers or radiofrequency-directed energy,” it claims.

In a recent investor presentation detailing the AOS agreement, AE describes the move as an “intellectual property generator”, giving it access to long-term research and development capability.

Specific technologies identified at AOS include thin-disk and short-rod amplifiers based on Yb:YAG laser crystals, advanced imaging systems capable of seeing through turbid media, and a variety of materials characterization techniques.