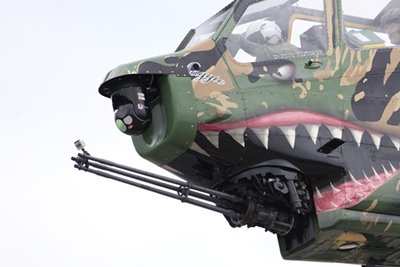 Wescam: on the nose

Wescam, the Canadian subsidiary of defense contractor L3 Technologies, says that orders for its electro-optic and infrared (EO/IR) systems are at an all-time high, thanks in large part to demand for drone applications.

After clocking up more than $500 million in orders in 2018, that momentum has continued through the start of this year – Wescam reported orders worth another $120 million for its various electro-optic product lines in the opening quarter.

Speaking at the start of the Paris Air Show, L3’s CEO Christopher Kubasik said: “Our ISR [intelligence, surveillance, and reconnaissance] Systems segment has done an exceptional job at growing its business by fostering innovation and facilitating collaboration across the L3 enterprise.

“Our industry-leading technologies and mission system solutions enable L3 to help solve the defense and security challenges of our customers in a competitive and extremely agile way.”

Drone demand
According to the company there has been particular demand for infrared turrets used in unmanned aerial vehicles (UAVs) and airships.

Specific examples include a major order from Poland, where its customer DrabPol Automotive has bought dozens of “MX-8” systems for installation on a new fleet of UAVs operated by the Polish Army.

Another recent deal worth more than $450 million came from the US Army, for the larger “MX-10D” sensor suite on its “Shadow” UAV, while in March Wescam established a service center in Korea to serve local customers and those in the surrounding region.

L3 adds that it is investing in research and development while the US Army evaluates options for its next-generation unmanned systems, eyed as the replacement for Shadow and targeted for 2025.

The Wescam division has also enjoyed recent success in Canada, where it will provide electro-optic/infrared sensors as part of a wider package of systems support to the Canadian Navy for its new combat ships.

Meanwhile, the company’s larger “MX-20” platform, which can accommodate up to seven different sensors, has been selected for Canada’s “SkyGuardian” fleet of remotely piloted aircraft.

“Team SkyGuardian is a significant benefit to L3 Wescam and provides more opportunities for the modular growth path of the MX-20 as mission portfolios evolve and the battlespace continues to change on a global scale,” said Jacques Comtois, VP and general manager of the L3 subsidiary, in a recent company announcement.

The firm boasts: “L3’s Wescam MX-Series has been engineered to focus on the three factors that drive maximum range: resolution, magnification, and stabilization. As a result, each turret has out-performed its major competitor in every performance area, giving Wescam the longest EO/IR target identification and designating ranges in the industry.”