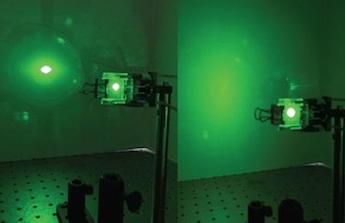 A team at Lewis University, Illinois, has developed a potential means to improve the safety of pilots when laser pointers are maliciously directed at aircraft from the ground.

It involves the use of a protective layer of liquid crystals, able to spread the incoming laser light and reduce the dazzling effect of the pointer on a pilot's vision. Incorporated into an aircraft windscreen, the structure could be a significant step forward in pilot safety.

"We wanted to come up with a solution that didn't require us to completely re-engineer an aircraft's windshield, but instead adds a layer to the glass that harnesses the existing power system for windshield defrosting," said Daniel Maurer of Lewis University.

In a presentation to the ACS Spring 2019 Meeting describing its breakthrough, the project team outlined how previous work on countering laser pointers has usually led to wavelength-dependent solutions, rather than a route to dispersing laser light whatever its wavelength.

The Lewis project took a different approach, focusing instead on the polarization and absorbance properties of liquid crystal materials to block incoming laser light.

"To decrease the intensity of incoming laser light, the liquid crystal N-(4-Methoxybenzylidene)-4-butylaniline was deposited between two pieces of conductive indium tin oxide-coated glass," commented the team in its paper. "The test cell is capable of decreasing up to 80 percent of incoming laser light by transitioning from its transparent, liquid phase to its opaque, pseudo-crystalline phase, with the cell being able to return to its transparent phase in less than three seconds."

The phase change is controlled by an electric current applied to the liquid crystal layer, causing a realignment of the molecules for as long as the current is flowing.

In trials using small one-inch squares of material, the aligned crystals blocked red, blue and green laser beams, through a combination of light scattering, absorption of the laser's energy and cross-polarization. The liquid crystals successfully blocked lasers of different powers, simulating various distances of illumination, as well as light shone at different angles onto the glass.

The group's intention is that the system can be made fully automatic, triggered when a photoresistor detects incoming laser light and applying voltage from the windscreen's existing power supply. This method should ensure that when the beam is removed, the system turns off the power and the liquid crystals return to their transparent, liquid state.

The next steps in the project will see the group scale up its approach to larger sizes, ultimately up to that of an entire aircraft windshield.

It will also investigate methods by which separate areas of a windshield to respond selectively to an incoming laser, with initial trials proving that a suitable sensor grid on 2-inch squares of glass can allow only the illuminated section of glass to change transparency. The team is also testing different types of liquid crystals to find more efficient and versatile molecules that return to the transparent state more quickly once the laser is removed.

"We only want to block the spot where the laser is hitting the windshield and then have it quickly go back to normal after the laser is gone," commented Lewis University's Jason Keleher. "The rest of the windshield, which was not hit by the laser, would remain transparent at all times."