Hololens2 has a lighter design and technical enhancements.

Tech giant Microsoft used Mobile World Congress in Barcelona, last week, to present its new HoloLens 2 headset, four years on from the launch of the first version of this holographic headset, designed to support virtual, augmented and mixed reality applications.

The second generation headset features a smaller, lighter design and enhancements with the technology said to improve the wearer’s “mixed reality” experience. Now with more than double the first generation's field of view, Hololens 2’s resolution is equivalent to a 2K HD immersion experience. The latest iteration also features eye-tracking sensors, which application developers will also have access to. Microsoft said it has also improved hand gesture recognition for better wearer interaction with projected holograms.

There are further changes on the design side: a flip-up visor should make Hololens 2 a better experience for spectacles wearers and the whole unit weighs slightly less: 566g compared with 579g for HoloLens 1. Battery life is now around 3 hours, which is typical of high-specification headsets.

The company commented that the HoloLens 2 “enterprise edition” is now available to pre-order for $3,500, which is $500 more than the “developer edition” of the HoloLens 1. Currently, Hololens 2 is specifed for “business and enterprise use,” and commentators said there is no sign of a “consumer edition”, so far. The HoloLens 2 is scheduled to start shipping later in 2019. 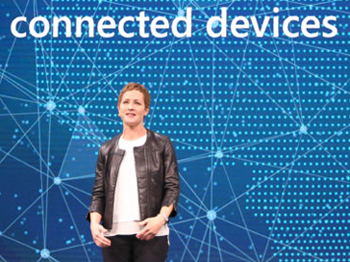 Julia White, Corporate Vice President at Microsoft Azure, blogged about the launch of the Hololens 2 at MWC on the company website.

She told the conference, “Since the release of HoloLens in 2016 we have seen mixed reality transform the way work gets done. We have unlocked super-powers for hundreds of thousands of people who go to work every day. Our customers asked us to focus on three key areas to make HoloLens even better. They want HoloLens 2 to be even more immersive and more comfortable, and to accelerate its time-to-value.

Immersion is enhanced by advancements across the board, including in the visual display system, making holograms even more vibrant and realistic. “We have more than doubled the field of view in HoloLens 2, while maintaining the industry-leading holographic density of 47 pixels per degree of sight,” said White.

Taking advantage of Microsoft’s new time-of-flight depth sensor, combined with built-in AI and semantic understanding, HoloLens 2 is said to enable direct manipulation of holograms with the same instinctual interactions a user would expect with physical objects in the real world.

Comfort is enhanced by a more balanced center of gravity, the use of light carbon-fiber material and a new mechanism for donning the device without readjusting. White continued, “We’ve improved the thermal management with new vapor chamber technology and accounted for the wide physiological variability in the size and shape of human heads by designing HoloLens 2 to comfortably adjust and fit almost anyone.”

Time-to-value is boosted by Microsoft's MR apps like Dynamics 365 Remote Assist, Dynamics 365 Layout and the new Dynamics 365 Guides applications. White said, “In addition to the in-box value, our ecosystem of mixed reality partners provides a broad range of offerings built on HoloLens that deliver value across a range of industries and use cases.” 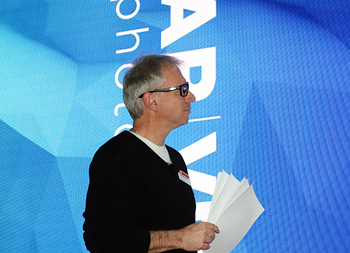 One month ago, at a two-day SPIE Photonics West conference on all matters AR, VR, and MR, including headsets, drones, and smart cars, it was standing room only. Both creators and critics of the various new realities sounded off on successes and misfires at Industry Days, some of the best-attended events of the whole six-day event, writes Ford Burkhart.

The latest Superbowl had just taken place in Atlanta and TV coverage the football game was a case study for augmented reality applications – as many globally watched sports events increasingly tend to be.

“If you’re a Superbowl fan, you came to right place,” said Bernard Kress, Partner Optical Architect at Microsoft Hololens and the SPIE event moderator. “MR applications are making the Superbowl more fun, more immersive. We are going to provide the world with this new immersive display to allow millions of people to experience the Superbowl and other events in ways they never have.”

But sharp criticism of this type of development came from Thad Starner, a professor at Georgia Tech, who argued that the industry is ignoring what users actually do, and like. For example, users don’t want the widest field of view, don’t want to play “head ping pong,” moving left and right before a big screen, he said. “Your eyes want to be watching within 30 degrees for the action.”

For videos, Starner said users prefer the small, portable screen in their pocket, like a smart phone, to a giant-size home theater screen. “Portability beats FOV.” And users don’t opt for 3D features. With a choice of 3D and 2D, Starner said, ‘Most users set the device to 2D mode. In this industry, that’s heresy.”

But Starner said there are certain cases for using heavy AR/VR headsets – fixing complex equipment, maintenance and repair work, and entertainment. Otherwise, he said, design of many sets “is still based on science fiction and aspiration, rather than achievable goals and real experiences.”