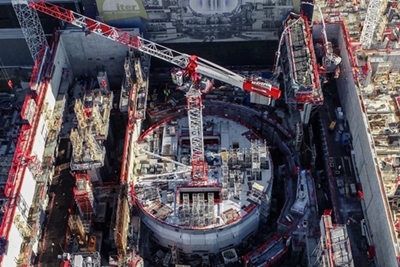 The International Thermonuclear Experimental Reactor, better known as the ITER fusion project, is to use an optical diagnostic system to monitor plasma density.

The France-headquartered ITER Organization, which is this week hosting a business forum in Antibes, has signed a contract with optical equipment firm Bertin Technologies to provide the preliminary design for a density interferometer polarimeter (DIP) system.

“The purpose of the DIP will be to help control plasma by measuring the density of the electrons in order to ensure its stability and obtain an optimal energy yield,” explains the Paris-headquartered firm, a subsidiary of the giant CNIM industrial equipment manufacturer.

The DIP is described as a key diagnostic component of future tokamak reactors – systems using a powerful magnetic field to confine a hot plasma in a toroidal shape.

“The plasma must be ultra-stable and controllable so the fusion reaction can last, and ensure enough gain to produce energy,” adds Jean-Baptiste Haumonté, Bertin’s sales manager for space and “big science” instrumentation.

The French firm says that the contract indicates its expertise in the field of Big Science [sic] and the excellence of its tailored optical systems for large-scale projects.

Fusion power
Currently regarded as the leading technological option for a future fusion reactor capable of net energy gain, the ITER project is scheduled to begin operations in December 2025.

The site is still under construction, but when completed its tokamak will be by far the world’s largest to date, with around ten times the plasma volume of today’s largest equivalent.

A consortium including China, the (current) 28 nations that make up the European Union, Switzerland, India, Japan, Korea, Russia and the US are all involved, in the hope that fusion science and technology can be advanced to the point where power stations based on the technique could be designed.

If and when it does become operational, ITER’s initial plasma will only last a few hundred milliseconds at low power. But that should be enough to enable its engineers to check the geometry of magnetic fields, and ensure correct operation of various essential components.

That initial experimentation should be followed by longer and more powerful blasts of energy, as engineers attempt to scale the technology towards more practical application in energy generation.

Bertin has in fact already been collaborating on ITER since 2009, developing instrumentation for fusion plasma analysis. “Building on its unique experience and expertise, Bertin’s objective for the coming years is to take charge of other aspects of complete diagnostics for ITER, from the design phase to the installation on site,” says the firm.

The company, which employs around 700 people, has also worked on systems for the giant Laser Megajoule fusion project near Bordeaux. Other high-profile clients have included the Australian army, which equipped its troops with the firm’s “Second Sight” gas detection camera, and the French government’s aerospace laboratory Onera.