Diversified approach and momentum in medical side of business gives confidence for revenue growth in 2019. 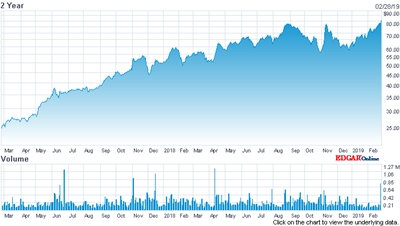 Novanta, the Bedford, Massachusetts company that owns a variety of photonics brands including Laser Quantum, Synrad, and Cambridge Technology, has cheered investors with solid growth in its latest financial results – and an optimistic outlook for 2019.

Reporting the firm’s full-year 2018 results, CEO Matthijs Glastra said that total sales rose by 18 per cent on the previous year, to $614.3 million. The company’s photonics division accounted for $249.4 million, a rise of more than 7 per cent.

“As we head into 2019, we remain very confident in our strategy, our business model, and our team’s commitment and ability to deliver results,” added Glastra, also telling investors that in 2019 revenues should rise to around $650 million.

That projected increase of close to 6 per cent appeared to cheer the markets, with Novanta’s stock price rising sharply to a long-time high that values the company at around $3 billion.

Near-term challenges
However, the photonics business unit will see a near-term blip, as Laser Quantum’s sales were boosted this time last year by strong demand for lasers used in new DNA sequencing equipment.

By the second half of 2019, that challenging comparison should improve, while Novanta appears relatively insulated from the sluggish industrial sector. “Of course, we see some softness in microelectronics, but that's a relatively minor component of our business,” Glastra told an investor conference call to discuss the latest results.

The CEO pointed out that the market for DNA sequencing is still in its infancy, noting: “As these platforms get rolled out to more applications the use will grow, and therefore our business will continue to grow. We have a very, very solid leadership position there.”

Multiple cylinders
Commenting more generally on industrial photonics markets, the CEO added: “There are certain packets that are softer or down, but the beauty is the diversification of our portfolio. We're firing on multiple cylinders - and if one cylinder is not as firing as rapidly, we have multiple others to compensate.

“You kind of see the power of the model here, that in any particular moment there might be some launch dynamics, [or] there might be certain softness, but then there's other markets or other technology cycles that will help lift us again.”

Novanta’s 2018 operating income of $71 million was also up strongly on the previous year’s $57.6 million. Net income was down year-over-year, although that was largely due to its acquisition of the remaining share of Laser Quantum, completed in October.

• Investors appeared cheered by Novanta’s update, with the company’s stock price rising more than 8 per cent on the Nasdaq exchange. Closing February 27 at $84.41, the stock is now trading at its highest level in two decades, and up 50 per cent over the past 12 months.