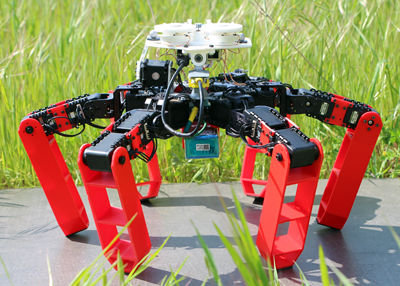 AntBot walks about and returns home using polarized light as a guide.

Desert ants are extraordinary solitary navigators. Researchers at CNRS and Aix-Marseille University, in the Institut des Sciences du Mouvement – Étienne Jules Marey (ISM), were inspired by these ants in their development of the first walking robot that can move and locate itself without GPS, which they call AntBot.

AntBot can explore its environment randomly and return home automatically, without GPS or mapping. Its method of orientation is a celestial compass sensitive to the sky's polarized light. This work and the design of the AntBot, described in Science Robotics, opens up new strategies for navigation in autonomous vehicles and robotics, say its developers.

The influence of desert ants on the Antbot development team is that while uman eyes are insensitive to polarized light and UV radiation, ants use it to locate themselves in space. Cataglyphis desert ants in particular can cover several hundreds of meters in direct sunlight in the desert to find food, then return directly to the nest.

Their navigation ability relies on two pieces of information: the heading measured using a so-called “celestial compass" to orient themselves using the sky's polarized light, and the distance covered, measured by simply counting steps and incorporating the rate of movement relative to the sun measured optically by their eyes. Distance and heading are the two fundamental pieces of information that, once combined, allow them to return smoothly to the nest.

AntBot replicates the desert ants' navigation capabilities. It is equipped with an optical compass used to determine its heading by means of polarized light, and by an optical movement sensor directed to the sun to measure the distance covered. The AntBot can explore its environment and to return on its own to its base, with precision of up to 10mm after having traveled a total distance of 14 meters.

Weighing only 2.3 kg, this robot has six feet for increased mobility, allowing it to move in complex environments, precisely where deploying wheeled robots and drones could be complicated, say the developers, “such as in disaster areas, rugged terrain, or even in the exploration of extraterrestrial landscapes.”

The optical compass developed by the scientists is sensitive to the sky's polarized ultraviolet radiation. Using this "celestial compass", AntBot can measure its heading with 0.4° precision whether in clear or cloudy conditions.

“Here we have a trio of advances. A novel robot has been developed, new, innovative and unconventional optical sensors have been designed, and AntBot brings new understanding on how desert ants navigate, by testing several models that biologists have imagined to mimic this animal. Before exploring potential applications in aerial robotics or in the automobile industry, for example, progress must be made, for instance in how to operate this robot at night or over longer distances.”

This project received support from the Direction Générale de l'Armement, CNRS, AMU, Provence-Alpes-Côte d'Azur region and from ANR under the Equipex/Robotex project.

The following CNRS video (in French) explains more about the development and operation of Antbot: