Johns Hopkins lensless scope is just a few hundred nanometers across yet can capture images of live neuron activity. 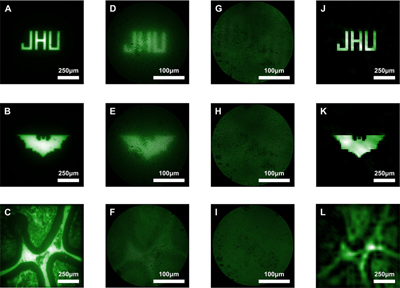 Imaging results from diverse sources, detailed in the study. Click for info.

Engineers at Johns Hopkins University, Baltimore, Maryland, have created a new lens-free, ultra-miniaturized endoscope, a few hundred nanometers in diameter, that can produce high-quality images. Their findings have been published in Science Advances.

"Usually, you have to sacrifice either size or image quality. We've been able to achieve both with our microendoscope," commented Mark Foster, an associate professor of electrical and computer engineering at Johns Hopkins University and the study's corresponding author.

Microendoscopes are designed to examine neurons as they fire in the brains of animal test subjects, and accordingly must be minuscule in scale yet powerful enough to produce a clear image.

Most standard microendoscopes measure up to a few millimeters in diameter and require larger, more invasive lenses to achieve high-quality imaging. While lensless microendoscopes exist, say the JHU team, the optical fiber that scans an area of the brain pixel by pixel frequently bends and loses imaging ability when moved.

In their new study, Foster and colleagues created a lens-free, ultra-miniaturized microendoscope that, compared to a conventional lens-based microendoscope, increases the amount researchers can see and improves image quality. To test their device, they examined beads in different patterns on a slide.

The researchers achieved this by using a coded aperture, a flat grid that randomly blocks light, creating a projection in a known pattern, akin to randomly poking a piece of aluminum foil and letting light through all of the small holes. This creates a messy image, but one that provides a bounty of information about where the light originates, and that information can be computationally reconstructed into a clearer image.

"For thousands of years, the goal has been to make an image as clear as possible," said Foster. "Now, thanks to computational reconstruction, we can purposefully capture something that looks awful and counterintuitively end up with a clearer final image."

Additionally, Foster's team's microendoscope doesn't require movement to focus on objects at different depths; they use computational refocusing to determine where the light originated from in three dimensions. This allows their endoscope to be much smaller than traditional versions.

Looking forward, the research team will test their microendoscope with fluorescent labeling procedures, in which active brain neurons are tagged and illuminated, to determine the endoscope's accuracy in imaging neural activity.

The Sciences Advances paper concludes: "We have demonstrated a distal lensless, scan-free microendoscope using a coded aperture at the distal end of a multicore fiber. By replacing distal lenses with a single spatial mask, widefield images of the scene with a 980μm-wide field of view are computationally recovered with superior image quality to a comparable conventional lens-based approach.

"In addition, the imaging system is capable of computational refocusing of objects located 1.5 mm apart in depth without actuation using a single snapshot of the scene’s coded-aperture response. Furthermore, the presented technique does not require additional elements to correct for chromatic aberrations, enabling color imaging by simply calibrating for each color channel.

"Thus, this distal lens-free microendoscope enables minimally invasive imaging with capabilities and performance that are not possible with conventional lens-based microendosopes."