Developer NIST says design could be used to indicate calcium, cell growth factor and some antibodies. 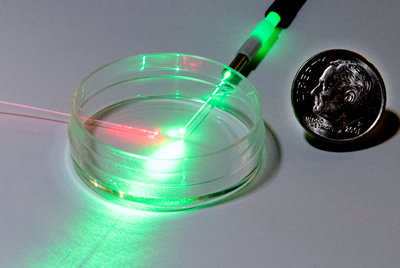 Optical pH tester: one version of the researchers’ experiment.

Medical professionals can already graft cells from a patient, deposit them onto a tissue scaffold, and insert the scaffold into the body to encourage the growth of bone, cartilage and other specialized tissue. But researchers worldwide are still working toward building whole, complex organs that could be implanted into patients.

Scientists at the US National Institute of Standards and Technology (NIST) are supporting this field of research by developing a promising new kind of optical sensor to support the study of tissue growth in the lab.

The NIST team’s proof-of-concept work, published in Sensors and Actuators B, demonstrates a small sensor that uses a light-based signal to measure pH, which is an important property in cell-growth studies. They say that the same basic design could be used to measure other qualities such as the presence of calcium, cell growth factor and certain antibodies.

Unlike conventional sensors, this measurement method could be used to monitor the environment in a cell culture long-term without having to disturb the cells regularly to calibrate the sensing instruments. Watching properties of the tissue in real time as they slowly change, over days or weeks, could greatly benefit tissue engineering studies to grow teeth, heart tissue, bone tissue and more. “We want to make sensors that can be put inside growing tissue to give researchers quantitative information,” commented NIST chemist Zeeshan Ahmed.

American University chemist and NIST guest researcher Matthew Hartings added, “What these sensors could give people is real-time information about tissue growth and disease progression.” Conventional sensors give researchers a series of snapshots without showing them the path between those points. But photonic sensors could provide scientists with continuous information, the equivalent of a GPS navigation app for disease.

“We want to provide researchers with a detailed map of the incremental changes that happen as tissue either grows in a healthy way or becomes diseased,” said Hartings. “Once researchers know the ‘streets’ a disease is taking, then they can better prevent or support the changes that are happening in a patient’s body.” 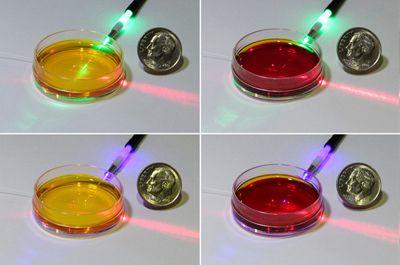 Measurements of pH are a vital part of tissue engineering studies. As cells grow, their environment naturally becomes more acidic. If the environment becomes too acidic — or too basic — the cells will die.

Today’s commercial pH instruments are highly accurate but unstable, meaning they require frequent calibrations to ensure accurate readings day to day. Without calibration, these conventional pH meters lose up to 0.1 pH units of accuracy daily. But tissue engineering studies take place on the order of weeks. A culture of stem cells might need to be grown for almost a month before they turn into bone.

“An increment of 0.1 pH is significant,” Ahmed said. “If your pH value changes by 1, you kill the cells. If after a few days I can’t trust anything about my pH measurement, then I’m not going to use that measurement method.”

What is needed for this kind of research, Ahmed said, is a measurement system that can stay inside an incubator with the cells in their culture medium and not need to be removed or calibrated for weeks at a time. For many years, Ahmed and his team have been developing photonic sensors to measure a range of qualities such as temperature, pressure and humidity. Some of these devices use flexible optical fibers etched with a Bragg grating.

To adapt their photonic devices to a pH measurement, Ahmed and Hartings relied on a well-known concept in science: When an object absorbs light, the energy absorbed “has to go somewhere,” Ahmed said, and in many cases that energy turns into heat. “For every individual photon, the heat produced is a very small amount of energy,” Ahmed said. “But if you have lots of photons coming in, and you have lots of molecules, it becomes an appreciable change in heat.”

For their demonstration, the scientists used a substance that changes color in response to changes in pH: red cabbage juice powder. The change in color is detected by Ahmed’s photonic temperature sensors. The researchers filled a petri dish with cabbage juice solution. One optical fiber was positioned above the dish. It was connected to a laser pointer and illuminated the sample. A second optical fiber was placed in the liquid. This second fiber contained the Bragg grating and acted as the temperature sensor. Ahmed’s team controlled the solution’s pH manually.

To make a measurement, the researchers shone red light into the sample. The juice absorbed this wavelength to varying degrees, depending on the pH of the solution. The photonic thermometer fiber detected slight changes in the juice’s heat; a change in temperature changes the wavelengths of light that can pass through the fiber’s Bragg grating. Next, the researchers shone green lightinto the liquid, and repeated the process. By comparing how much heat was generated by each color of light, researchers could determine the exact color of the cabbage juice at that moment, and that told them the pH.

Ahmed said, “We were able to show that it works over a wide range, from a pH of 4 to a pH of 9 or 10.” Ongoing work shows the photonic pH measurements are accurate to +/- 0.13 pH units and are stable for at least three weeks – much longer than with conventional measurements. The researchers say that according to their tissue engineering collaborators, the new photonic sensors could provide useful information for a range of biological systems being studied, particularly the growth of heart and bone cells.

The NIST team’s future plans include measuring quantities beyond pH, which would simply require swapping out phenol red for a different dye sensitive to whatever property researchers want to measure. Further in the future, Ahmed hopes the measurement scheme could potentially be used to monitor the growth of tissue in a real person’s body.