Shortlist for third round of $25M initiative - the world's largest program for photonics and imaging startups. 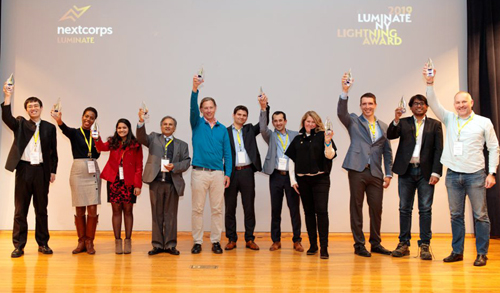 Luminate NY's third cohort of finalists from a diverse range of optics, photonics and imaging startups.

Empire State Development (ESD) has announced the 10 companies selected to take part in the Round III of New York State’s Luminate NY accelerator competition in Rochester.

The finalists include optics, photonics and imaging startups which were selected after pitching their innovative ideas to an advisory panel comprising industry experts during the Lightning Awards at the Strong National Museum of Play.

Each company will receive an initial investment of $100,000 and will be a part of Luminate’s third cohort, which will begin in January 2020 at the Sibley Building in downtown Rochester. The six-month program will help the selected companies speed the commercialization of their technologies and business. In June, the teams will compete during Demo Day for $2 million in follow-on funding. Funding for the $25 million program is being provided through the Finger Lakes Forward Upstate Revitalization Initiative award and is being administered by NextCorps.

Luminate NY supports innovators as they grow their ideas in Rochester with help from industry experts, businesses and local universities. The program aims to assist entrepreneurs who are interested in solving challenging industry problems, including, but not limited to: machine vision, inspection, biophotonics, security, surveillance, augmented and virtual reality, and autonomous vehicles.

The 10 selected startups include:

Luminate received interest for Round III from 101 applicants from 25 different countries, including: India, Canada, Australia, Israel, Russia, Singapore, and Spain. A total of 22 startups competed for the 10 available spots. Luminate NY Managing Director Sujatha Ramanujan said, “The caliber of the startups and technologies for Cohort III is very strong. Our OPI ecosystem in the Finger Lakes will provide a distinct advantage for these businesses as they work to speed their innovations to market.”

Round I winner, Double Helix Optics, has leveraged the optics infrastructure in New York State’s Finger Lakes region. It has partnered with Rochester optics firms to develop and manufacture new products and has collaborated with the Ithaca/Cornell community to advance the fabrication of its proprietary phase mask technology. Ovitz, winner of Round II, has expanded its office and talent in Rochester. The company has developed a system for individualized, vision-enhancing contact lenses to significantly improve people’s vision quality.

Finger Lakes Regional Economic Development Council Co-Chairs, Monroe Community College President Anne Kress and Greater Rochester Chamber of Commerce President and CEO Bob Duffy said, “Congratulations to these innovative teams on their selection to take part in the third round of the groundbreaking Luminate NY accelerator program in Rochester. This competition is helping the region further establish itself as a global leader in the burgeoning light-based products and services industry, helping to move the Finger Lakes forward for years to come.”

Mayor Lovely Warren said, “The City of Rochester has long been the optics and imaging capital of the United States. Next generation optics, imaging and photonics will play a vital role in our economy and in the innovative technologies and tools of our future – including augmented and virtual reality, autonomous vehicles, machine vision and biophotonic devices – with Luminate, the State of New York and the City of Rochester championing and remaining at the forefront of these emerging developments. Congratulations to the 10 companies selected to advance in this completion.”