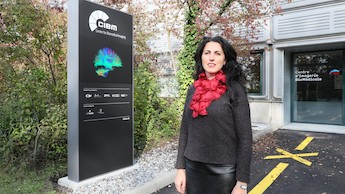 Pina Marziliano: CIBM has a real impact on society

The Center for Biomedical Imaging (CIBM) in Lausanne is celebrating the 15th anniversary of its founding, with the appointment of a new executive director and a statement of its future research priorities.

Since then it has focused on biomedical imaging research across the fields of electroencephalography (EEG); magnetic resonance imaging; positron emission tomography; and signal processing, with work spread across five sites.

The Center's founding executive director Rolf Gruetter stepped down from that role in April 2019, with Pina Marziliano appointed to replace him. Having began her professional career at Swiss start-up Genimedia, Marziliano has been a tenured professor at Singapore's Nanyang Technological University since 2012.

"The CIBM has a real impact on society, because the research we do seeks to resolve specific problems brought to us by clinicians," commented Marziliano. "Not only do we have the latest equipment, but we also know how to use it effectively – what equipment is required, and how the resulting data should be analyzed. This is important added value."

As part of the anniversary, CIBM has been highlighting some specific contributions made by its researchers, such as enhancements to EEG allowing accurate temporal and spatial information about cerebral function to be derived.

"We played a central role in the recognition of this neuroimaging technique and the development of methods that have made it possible for it to be used routinely in clinics, such as in neonatal care and the treatment of epilepsy," said Micah Murray, head of the EEG unit at CHUV-UNIL.

"I see this as a case where clinical needs drove applied research. We no longer focus on group or population studies; we now look at individuals, how they respond to a single trial, and the extent to which their functionality can vary."

The official anniversary ceremony on October 30th is due to see a panel discussion about the future of biomedical imaging, and about the next challenges to be tackled.

"There are issues relating to data management and ethics, as well as mechanical problems to be overcome and truly translational discoveries to be made," said Murray. "I also see new avenues to explore in neuroethology and the evolutionary study of physiological processes."

Particular CIBM focus areas for the future are likely to include wearable technologies, and the growing use of medical imaging in developing countries.

"The availability, wearability and affordability of EEG make it the method of choice for the large-scale screening of diseases with a major societal impact in developing countries, such as Alzheimer’s, depression and post-traumatic stress disorder,” said Christoph Michel of the EEG unit at HUG-UNIGE. "We’re just getting started, but the potential is enormous."

Another major challenge will be to develop prognostic and predictive imaging. According to Center researchers, PET scanners can currently show the current status of a disease, when the obvious questions for clinicians and patients relate to what may happen in the future. The goal of the CIBM PET group is to develop prognostic and predictive imaging techniques that will answer these questions.

The use of artificial intelligence in imaging is another focus area, and one expected to play an increasingly significant role in the future.

“Artificial intelligence will do much more than just help with diagnosis,” noted François Lazeyras, the head of the MRI unit at HUG-UNIGE. "AI will be directly involved in MRI image acquisition and other processes, improving quality and removing imperfections – such as when a patient moves while being scanned."

This trend may see the imaging processes being increasingly targeted at the physiology of human tissue in general, rather than focusing narrowly on lesion morphology. Information on cellular function is likely to help doctors predict how a patient will respond to a given therapy, or the chances that a transplanted organ will survive.

Pina Marziliano envisions all of these advances arising from an increasingly visible and more accessible Center. "I want to raise the CIBM's profile so that it becomes the leading Swiss biomedical imaging center," she said.