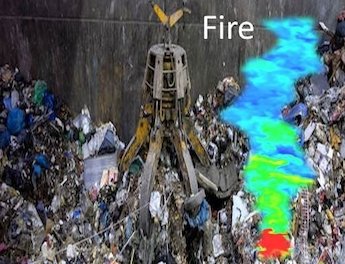 The use of lasers in fire detection systems usually involves detecting the variation in a laser beam's amplitude caused by the fire or its effects, but factors such as dust or steam can cause enough noise interference on their own to affect the system's performance.

A project involving Denmark's national metrology institute (DFM) and the University of Cambridge has developed a new platform that could be more effective for fires in harsh and dusty environments. The work was reported in Applied Optics.

Instead of monitoring laser amplitude, it looks for changes in the speckle pattern produced when a laser passes through an environment, an approach which could also allow the sensor to detect the increase in temperature caused by a fire before that fire itself crosses the laser's path.

"Speckle pattern analysis is a completely new solution for detecting fire and heat changes," said Mikael Lassen from DFM. "It is not only fast and relatively low cost, but also works in large, harsh environments. Our new system makes it possible to detect fire in dusty areas prone to fires, where current systems show limited performance or can't operate."

According to the researchers, the heat flow caused by a fire makes the laser beam jitter in a way that is detectable when the laser light is reflected back to a detector at the laser source. Statistical analysis and machine learning are then used to analyze the noise pattern of this dynamic speckle created by the laser light.

This approach allows the presence of broadband white noise to indicate a fire, while noise sources confined to a narrow range of wavelengths can be ruled out as arising from an outside mechanical influence, such as vibration.

In the published paper, the team describe how this approach does not rely upon the amount of light or its wavelength for detecting a fire, but on how the refractive index randomly fluctuates due to heat convection. This means that light obstruction from ambient dust particles will not be a problem, as long as a small fraction of the light is still detected. Fires without visible flames should also still be identifiable.

"The standalone laser system consists of an open source Linux-based system, a cheap 650 nanometer laser diode, and a positive-intrinsic-negative photo-detector," said the project team in its paper. "Laser light propagates through the monitored area and reflects off a retroreflector generating a speckle pattern. Every 3 seconds, time traces and frequency noise spectra are measured, and eight descriptors are deduced to identify a potential fire."

To validate the new fire detection system, the researchers tested a remotely operated proof-of-concept prototype at the Energnist I/S waste plant in Kolding, Denmark. Due to the extremely harsh, noisy and dusty environment, the plant normally has three to four false alarms per month.

"The system detected fires with an accuracy of 91 percent, which is a very good result taking into account the harsh environment," said Lassen. "Because it doesn’t rely on the absolute intensity of the light beam, it is robust to general attenuation due to dust and smoke."

Next steps for the project will involve converting its prototype into a finalized product, a task requiring completion of a housing structure, optimization of electronics and algorithms, and the design of a user interface. The researchers also plan to upgrade the optical detector and the laser, both to increase sensitivity and expand the sensing range. The goal is for the system to be able to detect fire 500 to 600 meters distant, and eventually over 1 kilometer away.