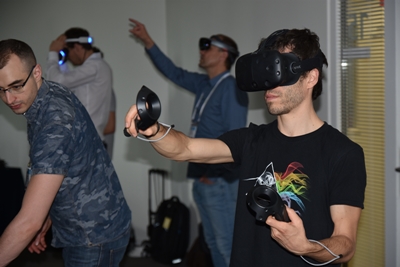 Announced at the Consumer Electronics Show (CES) in Las Vegas, the deals come shortly after WaveOptics agreed a similar arrangement with the mainland China ODM Goertek, which is also an investor. It has also signed a key partnership with Corning, which will provide the high-quality glass on which the waveguides are produced.

AR inflection point
The company says that it is now at a critical inflection point as the market for AR products continues to emerge and accelerate. Diffractive waveguides are the key optical component inside AR wearables, and the Oxford firm’s novel grating technology is said to offer a way to combine key optical attributes such as a larger “eye box” – the space in front of the eye where a viewable image is formed – and a wider field of view (FOV) with the small form factor seen as essential for AR glasses or goggles.

To achieve that, the WaveOptics waveguides feature two different diffraction regions, compared with the more conventional approaches that tend to use three different gratings.

Under the terms of the deal with Compal, which is a major manufacturer of laptop PCs and smart electronic devices, the two firms will develop AR wearables in the form of smart glasses.

WaveOptics’ CEO David Hayes said that the agreement would enable the firm to meet demand from both enterprise and large-scale consumer applications of the technology – something that he believes the industry has struggled to do thus far.

Wistron is said to have been investing in “extended reality” products in recent years, and Jeff Lin, the president of its computing products division, said: “The partnership with WaveOptics supports our plans to integrate leading value-added technology into our industry changing products.

“We expect waveguides to be incorporated into a range of devices, to enable an immersive AR experience. The impact of this widely anticipated technology on day-to-day life is expected to be significant.”

• The emerging AR/VR/MR industry will be the focus of a dedicated conference and expo at next month's SPIE Photonics West event in San Francisco. For details of speakers from the likes of Microsoft, Google, Huawei, Magic Leap, Facebook Reality Labs - among many others - visit the SPIE web site.