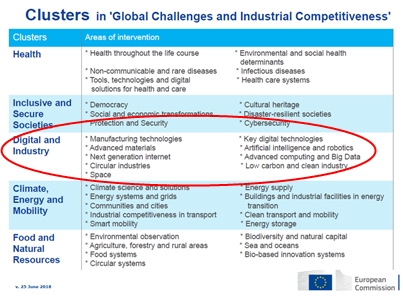 Digital and industry 'cluster' - but no mention of photonics

Three recent Nobel laureates working in the photonics sector have criticized the European Commission (EC) for omitting any explicit mention of photonics in its draft document outlining plans for the Horizon Europe research and innovation program.

In the letter, supported and publicized by the Photonics21 representative group in Europe, the three scientists write that it would be a “serious strategic mistake” to remove photonics from a priority list of technologies included in the EC’s draft plan for Horizon Europe.

“It is with deepest concern that we observe photonics does not appear to remain a priority of the European Commission,” they note, adding. “There is no scientific, technological, or industry policy rationale for such a decision.”

Key enabler
The Nobel winners contrast the apparent omission with the relatively high profile of photonics in the current Horizon 2020 funding program, which runs until the end of 2020. Under Horizon 2020, photonics has been officially recognized as a key enabling technology (KET), and attracted billions of euros in EC support via the Photonics21-coordinated public private partnership (PPP).

“A photonics capacity is vital to European sovereign security interests,” warn Mourou, Hänsch, and Hell in their letter, while noting that thanks to the explicit focus on the technology under Horizon 2020, Europe now has a “world-leading position and outstanding excellence” in the field.

In the draft plans that the laureates are referring to, the EC has outlined a more challenge-oriented, top-down approach to innovation funding under Horizon Europe, which has a proposed budget of €100 billion over seven years.

“Pillar 2” of that plan addresses the areas typically involving photonics technology, under the headline “global challenges and industrial competitiveness”. In a presentation dating back to June 2018, the EC provisionally allocates more than €50 billion in support across five key “clusters”.

Tenth priority
Of those clusters, “digital and industry” represents the applications most closely linked to photonics, with a provisional budget of €15 billion. Nine different technology areas are then listed by the EC as relevant to the digital and industry cluster.

And while photonics technology could be viewed as implicit and underpinning some of those areas – particularly “next-generation internet”, “manufacturing technologies”, and “key digital technologies” – the word “photonics” is not included explicitly.

The three Nobel laureates are urging Moedas and the EC to change that, and include photonics as a specific visible objective in the Horizon Europe plan. They stress the importance of both industrial and scientific expertise in photonics as essential for powering the digital economy across the continent, and to underpin future advances in key sectors like health, space, mobility, and security.

“We explicitly call on the European Commission to reconsider the current draft programming for the cluster on ‘digital and industry’ within the future Horizon programme, and include photonics as the tenth area of intervention, the tenth technology priority, in this industry cluster,” they conclude.

Mourou won a share of the physics Nobel last year for his co-invention of the chirped-pulse amplification (CPA) technique for generating ultra-high-power laser pulses; Hell shared the chemistry Nobel in 2014 for his work on stimulated emission depletion (STED) super-resolution microscopy; Hänsch was recognized with the physics Nobel in 2005 for his co-development of precision spectroscopy with frequency combs.