LZH-developed LIBS system on the way to the Pacific Ocean 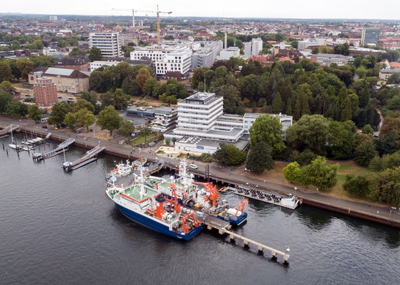 The GEOMAR Helmholtz Center for Ocean Research in Kiel, Germany.

The final integration of the LIBS system, developed by a Laser Zentrum Hannover-led European research group has now been successfully completed.

The LIBS system intended for undersea mineral research at depths up to 6000m has been handed over to the GEOMAR Helmholtz Center for Ocean Research, in Kiel, Germany, and will now make its way from there to the starting point of the research mission (“SO268”) in the Pacific Ocean.

In October 2018, optics.org reported on the successful completion of pressure tests on the same system

Scientists at the LZH have recently succeeded in measuring zinc samples at a pressure of 600 bar using laser-induced breakdown spectroscopy (LIBS). Now, the next major milestone in the EU Horizon 2020-funded ROBUST research project (Robotic Subsea Exploration Technologies) has been achieved.

Locating mineral resources on the sea floor has previously been associated with very high costs. In order to reduce this, LZH is working with eight other European partners to develop a laser-based, autonomous measuring system, which is expected to start work underwater by 2020. The system is designed to detect samples such as manganese nodules and analyze their material composition directly on the deep seabed. 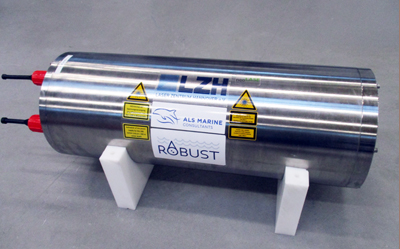 Finished LIBS system in pressure housing for use at depth of 6000m (600 bar).

Ready for the Pacific

The LZH has successfully integrated the developed LIBS system into the pressure housing designed and manufactured by Cyprus-based ALS Marine Consultants. The system was tested in a water basin at the LZH in Hannover, Germany. The objective was to prove the performance of the system’s power supply and data communication method with the ROV Kiel 6000 of the GEOMAR.

The next phase, later in 2019, will be the start of the journey into the Pacific Ocean, where the LIBS system will undergo further tests under real conditions from the ship ROV Kiel 6000, after which the actual research commences.

The project Robotic Subsea Exploration Technologies (ROBUST; grant number 690416) is funded by the European Union under the Horizon 2020 program.