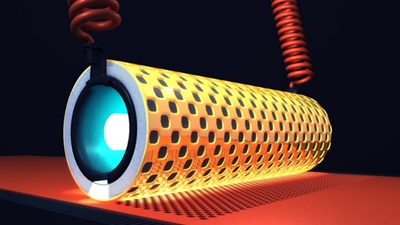 Lithography systems specialist SUSS MicroTec is working closely with a start-up company to develop a disruptive technology that has the potential to provide sub-wavelength resolution over very large areas, producing nanostructured coatings at a very low cost.

Claiming the ability to produce feature sizes measuring only 20 nm, the novel take on lithography has been developed initially by California-based Rolith and combines near-field optics with a cylindrical “rolling mask” technology – hence the start-up’s name.

SUSS, which is based in Garching, close to Munich in the south of Germany, has just entered into an exclusive license agreement with Rolith, which has so far attracted seed funding and is working towards a Series A venture financing round.

Rolith co-founder and CEO Boris Kobrin sees commercial possibilities in the technique for a diverse range of applications including advanced solar cells, more efficient displays, and smart glasses with anti-glare, self-cleaning and anti-fog properties. Kobrin himself has a track record in developing early-stage companies – his previous enterprises have included Rochester Photonics, Bragg Photonics and Holo Or, among others.

Phase-shift interference
The patent-pending Rolith approach relies on producing sub-wavelength optical resolution by phase-shift interference or plasmonic enhancement. The idea is that by using a large, rolling mask with an integral light source, tiny features can be imprinted onto very large areas of material. Crucially, the Rolith team believes that its method will be able to do this at an extremely low cost: a figure of less than $2 per square meter of substrate is claimed.

Whether or not that can be achieved with a real-world system remains to be seen. Through the license agreement with Rolith, SUSS will work on developing a prototype. In October, Rolith said that it had received initial funding from a “strategic corporate partner” to build such a system, and added that it would raise Series A finance before the end of 2010.

Frank Averdung, the CEO of SUSS MicroTec, said of the license agreement with Rolith: “Combined with our flexible equipment solutions, the novel optical nanolithography technology by Rolith [sic] has the potential to bring high-volume nanoimprint technology to market, by fundamentally changing the cost structure compared to current technologies.”