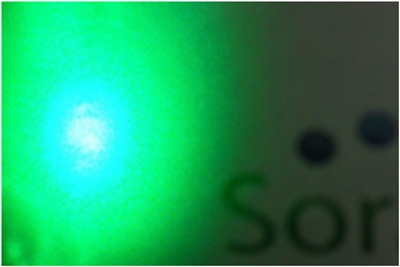 One of the optoelectronics industry’s recent success stories is the nitride laser, a device invented back in 1995 at the Japanese firm Nichia. Sales of such lasers are expected to net $495 million this year, according to the market research firm Strategy Analytics, thanks in the main to deployment of violet versions of this device in every Blu-ray player, recorder and PlayStation3 console. And a further hike in revenue is on the cards, with blue and green nitride lasers tipped to win deployment in the pico-projectors that are touted to become the next must-have feature in mobile phones.

Yet, despite all this talk of success, the nitride laser is a flawed gem. It is plagued by an incredibly strong internal electric field - typically 100 V per micron – that pulls apart the electrons and holes in its quantum wells (the ultra-thin layers of semiconductor material that are a critical part of the laser’s structure). This reduces the likelihood that these carriers can recombine radiatively, leading to a reduction in laser efficiency.

Compounding this problem, the indium gallium nitride quantum-well layer loses its consistency at compositions needed to make green lasers, according to research by a team at Sumitomo Electric Industries (SEI). Variations in indium content increase the threshold current of the laser, so a higher voltage is needed to turn on the device.

All these issues can be overcome by building nitride lasers on different cuts of a gallium nitride crystal. Turning to semi-polar planes can substantially reduce the strength of the electric fields within the device, and this field can be banished altogether by forming the laser on a non-polar plane.

Start-up expertise
Over the past few years, two research teams pursued the latter approach, reporting their success – the first ever violet non-polar lasers - side by side in the 23 February 2007 edition of the Japanese Journal of Applied Physics. The Japanese company Rohm was one of these trailblazers; the other a group at the University of California, Santa Barbara (UCSB), to where GaN laser pioneer Shuji Nakamura had moved after an acrimonious departure from Nichia.

Since then, the output power and spectral range of semi-polar and non-polar lasers has steadily increased to a level that now eclipses that of the conventional designs. This is mainly due to the efforts of two UCSB spin-off companies set up by Shuji Nakamura and his colleagues Steven DenBaars and James Speck. In 2008 they helped form start-ups Kaai and Soraa, which were funded by Khosla Ventures (the VC company enlisted former UK Prime Minister Tony Blair as a senior adviser earlier this year) and co-located in Goleta, California, just west of the UCSB campus. Earlier this year, the laser specialist Kaai and the LED-focused Soraa merged their activities under the latter's brand.

Soraa now claims to have produced the world’s most powerful continuous wave single-mode nitride laser, a 447 nm emitter with a peak output in excess of 800 mW. The West-coast start up is also claiming a wall-plug efficiency record of 23 percent, a significant advance on Osram’s best single-mode blue lasers, which had previously held the efficiency record. Soraa has been developing blue lasers for just over a year, and attributes the rapid progress to a series of incremental improvements that stem from working with the new crystal orientations.

“Due to the increased electron-hole overlap and reduced effective hole mass on non-polar and semi-polar orientations, design flexibility is greatly increased, and layers can be changed, added, or omitted,” explains James Raring, Soraa’s VP of laser engineering. Specific applications for these incredibly powerful blue lasers are not yet being discussed by the company, but Paul Rudy, general manager of Soraa’s laser division, told optics.org that they could be used for a variety of existing and emerging industrial and consumer applications. 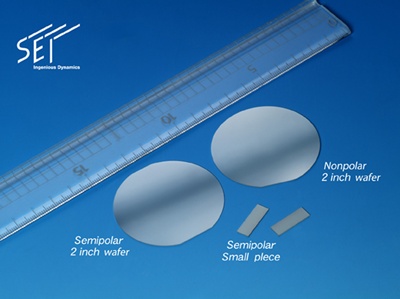 Going green
Soraa has also been tackling one of the optoelectronics industry’s perennial problems – green diode emitters. It recently produced one of the world’s most powerful continuous-wave green laser diodes, a 60 mW device emitting at 521 nm. Earlier this year its best-performing green lasers could only produce a few milliwatts, highlighting the substantial hike in power resulting from improvements to material quality and device design.

SEI also holds a record for green nitride lasers – the longest emission wavelength, which now stands at 534 nm. This result appears in a paper just published in Applied Physics Express, which contains a study showing that the threshold current of semi-polar lasers emitting at 520 nm and beyond is two to three times lower than that of conventional equivalents.

Setting laboratory records highlights the promise of these novel lasers. However, if they are going to kick on and enjoy commercial success they must also be manufactured at competitive prices. For semiconductor lasers, major factors in the price are the cost of the wafer material upon which the devices are manufactured, as well as the yield of good devices that can be produced per fully-processed wafer.

Reducing costs
The first non-polar lasers were formed on notoriously expensive substrates that were no bigger than a fingernail. But it seems that larger, lower cost substrates are on the way. Sumitomo looks to become one of the first suppliers – it has recently developed 2-inch non-polar and semi-polar substrates that it plans to manufacture in high volume. It will be competing for customers with the Poland-based gallium nitride crystal specialist Ammono, which plans to start shipping 1-inch semi-polar and non-polar substrates in 2011.

Although these substrates will command higher prices than conventional ones, it could still be cheaper to make semi-polar and non-polar lasers if these devices can be manufactured with high yields. Anecdotal evidence from the labs of UCSB, Sumitomo and Soraa suggests that this will be the case.

These novel lasers must also be reliable enough to win market success. Tests by engineers at Soraa show that, on average, it takes 10,000 hours for the output of a 60 mW blue laser to fall by 20 percent. “Ten-thousand hours is an excellent standard,” says Rudy. “From the statistics that we’ve run, it’s absolutely clear that these lasers are well-suited for pico projectors.”

Soraa, unlike Sumitomo and Rohm, is willing to shed some light on its commercial activities. It is already sampling lasers and plans to ramp production in 2011. If the rapid advances in semi-polar and non-polar technology continues on its current trajectory, then these devices appear destined to make a major impact on the semiconductor laser market.

Richard Stevenson is a freelance science and technology journalist based in Chepstow, Wales.