Strong sales and only minor increases in operating expenses add up to record profit for the US-based photonic component and module maker. 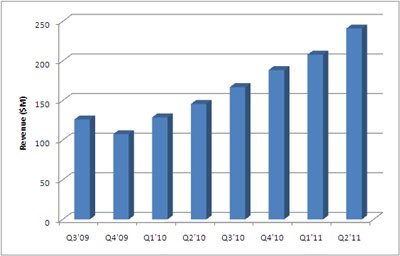 The Californian company, which sells products primarily for telecommunications and data center applications, and manufactures both VCSELs and conventional laser diodes, posted record sales of just under $241 million for the second fiscal quarter of its 2011 financial year. That represented a 16% increase on the immediately preceding quarter, and a jump of 65% from the same period of last year.

CEO Jerry Rawls said that while the market for Finisar’s products continued to be very strong, leading to the sales rise, there was virtually no increase in the company’s operating expenses. The result was a net income of $33.8 million – another company record.

On top of that operational performance, Finisar won a significant legal battle during the quarter, banking $11.3 million in cash (net of legal fees) after reaching a settlement and cross-licensing agreement with Source Photonics – whom Finisar had sued for breaching patents relating to optical transceiver modules.

But it is the underlying increase in demand for bandwidth that is really driving Finisar’s momentum, and the company is continuing to add manufacturing capacity for WSS production at its facility in Shanghai, China. Demand for 40 Gb/s and 100 Gb/s products is growing strongly, and Finisar has new products operating at those speeds, as well as more compact ROADMs, in the launch pipeline. Meanwhile, full-scale production of a range of tunable XFP modules is anticipated by the end of the first calendar quarter of 2011.

"Do all your holiday shopping online"
Having met many of its recently-set financial targets already, and with a book-to-bill ratio of more than one, Rawls was suitably buoyant about the forthcoming quarter, in which he expects the company to post revenues of between $247 million and $262 million and more strong earnings.

In a conference call to discuss the latest results, the CEO also joked that he wanted the investor representatives participating to “do all their holiday shopping online, and download lots of movies”. And it is exactly this kind of behavior in the wider world that is driving the global demand for bandwidth, and in turn Finisar’s optical products.

Rawls drew attention to a recent forecast by the analyst company Lightcounting, which predicted that the total addressable market for Finisar products would grow at a compound rate of between 15% and 20% for the next three years, as data centers and fiber-optic networks are built-out to accommodate the growing online traffic.

The stock market also welcomed the Finisar outlook, with shares in the company rising by close to 15% in early trading after the latest results were announced. That is in sharp contrast to the reaction to Finisar rival Oclaro's most recent results, which had dragged down both Finisar and JDSU on fears of a wider slowdown in the optical communications sector.